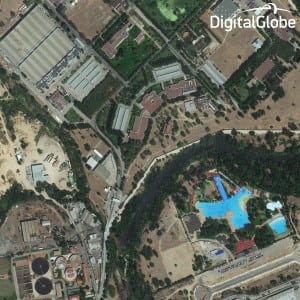 A WorldView 3 image of Madrid at 40-cm resolution. Photo: DigitalGlobe

[Via Satellite 08-27-2014] DigitalGlobe has released the first images from its high-resolution satellite WorldView 3, launched on Aug. 13 aboard a United Launch Alliance (ULA) Atlas 5 rocket. The satellite carries an Exelis super-spectral imaging system comprised of a sensor, a telescope and a Shortwave Infrared System (SWIR), which enables observations through interference such as haze, fog, dust and smoke.

WorldView 3 reached Initial Operational Capability (IOC) for all 27 spectral bands on Aug. 21. DigitalGlobe is still calibrating the satellite, a process the company expects will take several months. In orbit 617 kilometers above the Earth, WorldView 3 collects imagery at a resolution of 31 centimeters. DigitalGlobe’s next satellite, WorldView 4, will also carry an imager from Exelis.