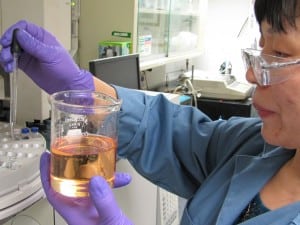 [Via Satellite 08-15-2014] Aerojet Rocketdyne anticipates the first users of the “green fuel” hydrazine alternative AF-M315E will be SmallSat manufacturers. The company recently completed testing a 1-newton engine designed for attitude control at the company’s new green propulsion test facility. Findings from these tests have expanded the number of missions for which the fuel is well suited.

“When you control a small satellite, you need to be able to fire your rocket engine in very small pulses so that you get accurate control,” Roger Myers executive director, advanced in-space programs at Aerojet Rocketdyne told Via Satellite. “We demonstrated the pulse duration and frequency required and also the number of pulses. We greatly exceeded the total number of pulses and the total duration of hot firings. What that means is we can do the mission that we’re planning and many other missions.”

The United States Air Force Research Lab at Edwards Air Force Base in California created AF-M315E as an alternative to the corrosive and highly toxic fuel hydrazine. While hydrazine is one of the most noxious substances used in the satellite industry, AF-M315E stands on the very opposite of the Lethal Dose 50 (LD50) spectrum. The green fuel is comparable in toxicity to caffeine or drinking too much water (not that consumption is encouraged). The propellant has been in development for more than 15 years now and is readying for the first launch on a SpaceX Falcon Heavy in late 2015.

“There are two ways to look at this, if compared to a hydrazine system,” explained Chris McLean, GPIM principle investigator at Ball Aerospace. “One is I keep the exact same everything, and for an increase in mass of what I’ve stored in the fuel tank I get 50 percent more life. Or, I use a smaller tank and redesign my propulsion subsystem, and I have a much lower mass propulsion system that gives me the same type of total impulse.”

These characteristics, according to Myers, give the fuel a strong value proposition for SmallSats that are often volume-limited.

“The part of the market that is most sensitive to those factors is the small satellite market, so we see emerging opportunities in the small spacecraft arena for this propellant and these engines,” he said. “Anything from a CubeSat up to a couple hundred kilograms.”

AF-M315E has taken a long time to be accepted because despite its advantages, the propellant burns at an extremely high temperature. To use the fuel, the same catalytic carrier for hydrazine must be employed, but whereas in a hydrazine system the catalyst will last for a significant stretch of time, with AF-M315E it lasts only 11 seconds. Extensive research was needed to overcome this high-temperature problem.

McLean added there are “significantly advanced thermal constraints” on the GPIM engines as well as new thermal management designs. Myers said Aerojet Rocketdyne has selected different alloys suited for high ignition temperatures and adjusted the interface for how the engine is mounted on a satellite. Testing of the 22-newton thruster, the primary divert engine, is scheduled to occur in a few weeks. Once the GPIM and other early adopter missions help prove the propellant, Myers hopes this will pave the way for adoption in larger spacecraft.

“We are also looking at much bigger satellites, but the reality is that this market is a fairly conservative market. It takes time to change and insert new technology, so I think the entry point for this technology is more in the small satellite arena: CubeSats, SmallSats up to a couple hundred kilograms, and then gradually as the market becomes comfortable with the technology, we’ll expand its application into other arenas. But I think in the beginning it’s mainly going to be the SmallSat class of vehicles,” he said.