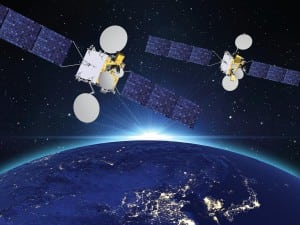 “Thales Alenia Space has made of lot of progress in the development of constellations with, for example, the elite-bus platform,” Gee told Via Satellite. “We are now looking to take this engineering forward into a mini-GEO [satellite].”

“We are exploring this by looking at what opportunities we could have here in the U.K., and developing this in addition to the activities we are carrying out across the Neosat program. This federative program can also open the door to future observation or scientific missions from GEO orbits including local companies and labs in the U.K.,” he said.

Gee said the European Space Agency’s (ESA’s) Neosat program has had a heavy influence on the mini-GEO project. ESA has set the goal of reducing the cost of operating a satellite in orbit by 30 percent. Thales Alenia Space and Airbus Defence and Space are both working on the Neosat next generation satellite program under contracts from ESA. In addition to this, Thales Alenia Space’s work with electric propulsion is another strong influence. In May 2014 the company signed a new contract with Snecma for plasma thrusters. Gee said electric propulsion is a top strength for the subsidiary.

The U.K. Space Agency’s ambition to grow the country’s role in the global space industry, such that 10 percent of it is domestic, attracted the attention of Thales Alenia Space, but is also alluring to others. Lockheed Martin recently opened a space technology office in Harwell, Oxford. There will be areas of overlap, fostering more competition within Great Britain, but Gee said the build-up of the country’s space industry “can only be encouraging.” He is confident that as more companies place stakes in the country, there will not be too much competitive overlap.

Thales Alenia Space U.K. is temporarily looking to pull resources from France, Spain and Italy for support. Gee said other Thales subsidiaries will enable the company to bolster quality assurance, manufacturing techniques, inspection and even some assembly. As momentum builds in the new satellite project, Gee expressed confidence that it will generate strong interest in the satellite communications market.

“It could lend itself to other missions as well, but primarily the mini-GEO would be telecoms,” he said. “Whether it will be Ka broadband or small missions in DTH … it’s an area that we feel there could be a market for now and in the future.”