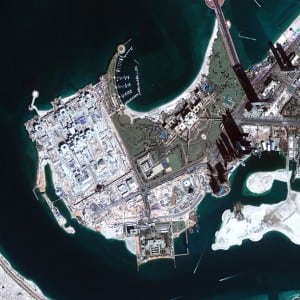 Image taken from the DubaiSat 2 satellite of the Emirates palace in Abu Dhabi on December 1, 2013. Photo: EIAST.

[Via Satellite 05-13-2014] The Emirates Institution for Advanced Science and Technology (EIAST) unveiled results from its Super Resolution Tool, developed by engineer Saeed Al Mansoori. The tool improved resolution of satellite imagery by 2.5 feet, including images taken by the DubaiSat 2 satellite.

“The development of the new tool was in response to the growing need of improving the quality of satellite images,” said Al Mansoori. “Usually, these images have fixed resolutions, and it would be difficult to upgrade these once the satellites have already been launched into the outer space. The ‘Super Resolution Tool’ has saved us from the efforts of designing new complex parts just to improve the quality of the captured images. It has also reduced the cost of satellite production.”