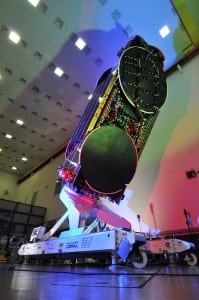 [Via Satellite 04-30-2014] The recent decision made by the United States Court for the Southern District of California to award ViaSat $283 million in damages against Space Systems Loral (SSL) may be a long way from reaching a conclusion — both companies have taken further action. ViaSat is requesting the court to permanently ban SSL from work related to the three patent infringement charges and the two nondisclosure agreement breaches. SSL, on the other hand, wants to have the decision reversed on the grounds of a wrongful jury verdict.

“SSL is disappointed with the verdict. However, this process is not over. SSL will seek to overturn the verdict in post-trial motions and if necessary, through the appeal process,” John Celli, president of SSL told Via Satellite. “Under the patents at issue in this case, ViaSat claims to have invented basic principles of satellite design that have been broadly known for decades. Since these are established aspects of satellite design, we do not believe the ViaSat patents are valid or that SSL has infringed any valid claims of those patents, consistent with the position we’ve been taking in this matter all along.”

The jury’s conclusion centered around technology involved in manufacturing ViaSat 1, a High Throughput Satellite (HTS) that achieved a significant improvement over previous HTS satellites. Loral, the previous owner of SSL, sold the company to MacDonald Dettwiler and Associates (MDA) in June 2012, but indemnified MDA for the lawsuit which began in February of that year. Loral, owner of XTAR and Telesat, was not found liable in any of the charges. As a preventative measure the company made a liability sharing agreement with MDA in the case of a change of control at Loral, which caps its indemnification liability at $200 million.

“This one is going to appeal, and the final verdict could be years away,” Chris Quilty, SVP at Raymond James said in a research note. “Ongoing litigation costs for ViaSat could be substantial and it is not unprecedented for jury trials to be overturned by an Appeals court … if ViaSat’s patents are upheld through the appeals process, ViaSat could potentially impose a royalty fee on some-or-all of the 33 high throughput satellites currently announced or under construction. At 6 percent, this royalty could equate to a $10 to 20 million fee per satellite.”

There are current satellites SSL is manufacturing that could be immediately grated by the court ruling. In addition to stipulations about future satellites, ViaSat has requested that the court mandate the discontinuation of current satellite projects with technology related to the case. Two satellites for Australia’s NBN Co, along with Star One’s D1 satellite and EchoStar’s EchoStar XIX could be effected.

“We continue to believe that SSL’s conduct was consistent with, and in due regard for, all applicable and valid intellectual property rights of ViaSat and that SSL did not breach any contracts,” said Michael Targoff, vice chairman of Loral. “We believe that SSL has strong grounds for a reversal of the jury verdict, which we believe will ultimately result in vindication of our position. Justice in this case hinged on the complicated history of satellite technology, which was understandably difficult for the jury to completely comprehend. In particular, the damages awarded were not in any way justified by the evidence presented.”

“Loral has said the jury didn’t understand how things are done in the satellite business. The verdict says otherwise,” said Rick Baldridge, president and COO of ViaSat. “With a radical new design that yielded a 10X gain in capacity, ViaSat is disrupting markets like Direct-to-Home Internet and in-flight Wi-Fi. Disruption doesn’t happen without innovation. By confirming the validity of ViaSat’s patents and intellectual property and awarding substantial damages, the jury made clear that ViaSat is an innovator that was taken advantage of.”

The industry will closely watch the development of this case. The massive increase in capacity brought about by HTS is viewed by many as a means to revitalize the role of satellite. With the case already spilling over to affect other SSL customers, the outcome will influence both satellite operators and other manufacturers.

“The 20,000-foot question is: how will this impact the emerging use of High-Throughput Satellites, both who can manufacture them[and] what capabilities they will have?” Quilty told Via Satellite. “If ViaSat is able to restrict the core technology, it would have a fairly meaningful impact on the industry as a whole. You could almost run through a list of every satellite manufacturer and satellite operator and find some potential impact on their fleet plans, depending upon how their patent position is applied.”