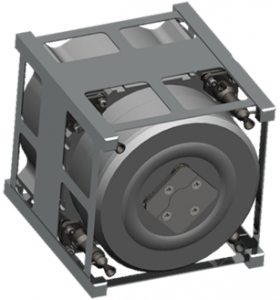 [Via Satellite 04-25-2014] In a move to capitalize on the ever-growing CubeSat market, Aerojet Rocketdyne has begun testing three different propulsion systems using 3-D printed designs. The decision to bolster the company’s smallsat project stemmed from a contract with NASA’s Flight Opportunities Program Office at Armstrong Flight Test Center in California. Under this contract, Aerojet was to build a CubeSat propulsion system that runs on hydrazine, the chemical fuel commonly used by larger satellites for orbit raising and other spacecraft maneuvers.

“CubeSats are currently short-lived devices; our goal is to try to increase the lifespan of CubeSats by adding propulsion for drag make-up and for deorbit. That gives you the ability to do a longer mission and get more value out of your CubeSat,” Christian Carpenter, program manager for space advanced programs at Aerojet Rocketdyne, told Via Satellite.

The first phase of the contract involves hot-fire tests of the propulsion system. If successful, this could lead to a flight demonstration. Aerojet is using 3-D printing to quickly adapt the findings from the hydrazine system for a green alternative and a cold gas design. The green propellant is the same non-toxic fuel made to power NASA’s Green Propellant Infusion Mission that Ball Aerospace is working on. The Computer Aided Design (CAD) process allows for changes to be made quickly and reduces the company’s lead-time by 50 percent or more.

“We can make things fast, cheaper, and perhaps most importantly, we can adapt better,” explained Carpenter. “We can take a design that has been created for the hydrazine system, change the CAD model, and then we can get parts made for our green propellant system with very little impact to cost or schedule. If we had machined this out of titanium through subtractive manufacturing, which is our typical approach, it probably would have cost about 50 percent more.”

The use of 3-D printing is part of Aerojet’s strategy to keep the cost at a level the market will bear, as the value in CubeSats comes from their inexpensive production and launch. The project is currently limited in funding and tied closely to the decision NASA makes regarding its use. Still, Carpenter believes there is sufficient demand from the commercial sector to justify the investment.

“We are finding that a lot of CubeSat users want to go to different locations, so the propulsion allows you to get to the mission orbit that you really want,” he said. “It might be an orbit beyond the deorbit requirement. If they can’t deorbit within 25 years, then they can’t fly. This would allow them to go up to that orbit, do a mission and then come back down and meet that requirement.”

CubeSats equipped with hydrazine are not allowed inside the International Space Station (ISS), a popular location for deployments. The green propellant, AF-M315E, is also banned from the station because it is still a fuel, which presents the risk of leaks. Cold gas, in contrast is allowed, and tests have even been conducted with it on the ISS.

“Right now the CubeSat cannot go through the ISS with hydrazine on it, [but] that doesn’t mean it can’t launch on the space station, it just means that it can’t go through the vehicle,” Carpenter said. “There would be ways to take the CubeSat up to station, and then eject it without taking it on the ISS. It depends on which way you go.”

Aerojet, however, is looking into accessing the space station. In order to get approval, the company will have to prove that it is without a doubt safe to astronauts, as well as to the multi-billion dollar laboratory.

“There is not a lot of fuel on the spacecraft, so we are going to be discussing as we go forward if there is an amount that is acceptable,” said Carpenter. “Right now the answer is, ‘No you can’t,’ but we believe there is a path to doing that in the future.”

According to Carpenter, these CubeSat propulsion systems can add years of life extension to CubeSats, which may enable them to perform a greater array of commercial tasks. Small satellites are expected to grow in popularity, which could prove to be a boon for Aerojet if its propulsion systems take off. The company expects to have the first systems flying in 2015 or 2016.

“After this program, we have to go through a qualification activity and build a flight unit. We are very close,” said Carpenter. “All of this can be done in about a year’s time. We believe we can be flying in one to two years. On the green system, we see that lagging behind hydrazine by one to two years.”

But if NASA’s enthusiasm for the program dwindles, this could affect its fate. While the cold gas design is commercially driven, the other chemical systems are more closely tied to the space agency’s contracting decisions. In addition, the green propellant requires some external structure changes to accommodate a different engine. For now Aerojet will continue to develop the systems and look to gauge what the industry and the agency expect.

“The CubeSat market appears to be headed more toward a typical commercial product where people are looking to buy something that is already qualified … we are currently trying to understand if there are companies interested in doing the qualification or if the market is only going to bear something that is already qualified. Based on that, we will find out,” Carpenter said.