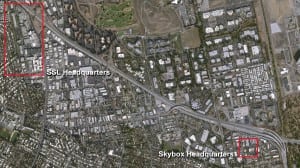 This image was captured by SkySat 1 which shows the SSL and Skybox headquarters. Photo: Skybox and SSL

[Via Satellite 02-11-2014] Skybox Imaging has taken the first steps toward fleshing out its entire constellation of small, high-resolution Earth observation satellites. The company selected Space Systems/Loral (SSL) to build 13 identical LEO satellites, each measuring approximately 60 x 60 x 95 centimeters and weighing roughly 120 kilograms, to be launched during 2015 and 2016. Skybox came to this decision after conducting a battery of tests on SkySat 1, which was launched in November 2013.

“[SkySat 1] is performing phenomenally well. It really is performing beyond our original expectations,” Julian Mann, co-founder and VP of product management at Skybox, told Via Satellite. “Although we are still in our calibration and validation phase … the quality of data that we’re seeing has really blown everybody away.”

The confidence boost Skybox received from SkySat 1 has propelled them to this recent decision to partner with a larger satellite manufacturer. Delegating the production of multiple satellites will allow Skybox to stay focused on its areas of strength, namely, designing and prototyping low cost satellites as well as creating data storage and analysis software.

“We’ve got a lot of core competencies that we have built up within the walls of Skybox. But with everything that we’ve done, we realize that we are still a small and growing company,” said Mann. “We made the strategic decision that repeat manufacturing was not a core competency that we needed to grow within our walls here. We are bringing in their [SSL’s] wealth of expertise in what it takes to take a well-understood validated design for a single system and stamp out multiple copies of it in an affordable reliable manner.”

This decision has allowed Skybox to move forward with its larger plans for the constellation, which will comprise 24 satellites when complete. The full constellation will be able to visit any point on Earth several times per day. Assessing SkySat 1 helped the company confirm critical details such as the lifespan of each satellite. Due to their small size and low orbit, Skybox needed to establish a stable “refresh rate” for the constellation so that satellites could be replaced and updated on a regular basis.

“Initially, we thought our target was going to be roughly a four-year lifetime for the satellites,” said Mann. “As we’re seeing their performance and as we’ve analyzed the data coming off of them, we see that we are going to have at least a six-year lifetime on a per-satellite basis. Long term looking at the market, we think we can reliably have about a launch per year going forward which means we can populate a respectable sized constellation with a one-launch-per-year refresh rate.”

Skybox is eager to get to work meeting the needs of data customers who already want access to imaging data from its satellites. According to Mann, the company has received interest from companies in agriculture, insurance and oil and gas. The company’s next satellite, SkySat 2, is planned for launch in Q2 of this year onboard a Soyuz rocket.

“You can’t quite call yourself a constellation company with one [satellite],” he joked. “Once you get two up there you can begin to do so.”

To expedite the process of providing satellite data and imagery, SkySat 2 will be used to accelerate the tuning and focusing time period between launch and use. Once production is underway, Skybox plans to launch the satellites in groupings of six and have them operating in a little time as possible. Calibrating SkySat 1 was successful, but took longer than the company wants to spend with future spacecraft.

“We can’t launch blocks of satellites that take months to get everything tuned and calibrated,” said Mann. “We would love to get to the point were we can launch a satellite and not only open the door and start collecting imagery, but be collecting imagery that’s of a quality and at a consistency that we can start delivering to customers. SkySat 2 is an opportunity to put that to practice.”

At its core, Skybox is a company that wants to reap the benefits of being small. Mann described the geographical proximity of SSL to Skybox as a “big factor” in the decision to partner. A quick car ride is all that is needed for the two companies to meet together and work on satellite design.

“[At Skybox] the guys who are designing the camera system are sitting in the same building as the guys who are writing the algorithms to process the imagery once it hits the ground,” said Mann. “Having a manufacturing partner that allows us to continue that level of integration across our various disciplines will be really important going forward.”

For SSL, best known for its high-power geostationary communications satellites, this contract is a step forward to further expand its market and its capabilities building LEO imaging satellites and solutions.