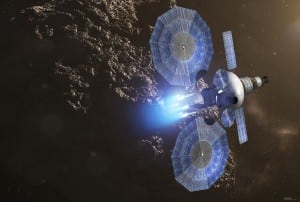 [Via Satellite 01-22-2014] ATK has deployed its Solar Electric Propulsion (SEP) MegaFlex solar array under a NASA contract to further the development of a high-power system for future manned and robotic exploration missions.

The MegaFlex solar array can generate 40kW of power when fully populated with solar cells, and has been considered for near-term mission contracts including NASA’s Asteroid Redirect Mission.

With a 32-foot diameter, ATK’s MegFlex solar array is based on ATK’s UltraFlex platform that powered NASA’s Mars Phoenix Lander in 2008. The use of these systems together enables low mass and small-stowed volume for multiple missions.

“NASA’s over-arching objective is to further the development of low mass solar arrays that can be stowed very compactly for high-power SEP systems to be used for future robotic and manned exploration missions,” said David Shanahan, vice president and general manager of ATK Aerospace Group’s space components division. “By building on our family of solar arrays, our team was able to develop this breakthrough with affordable innovation and in rapid fashion to support NASA’s far-reaching planning efforts.”