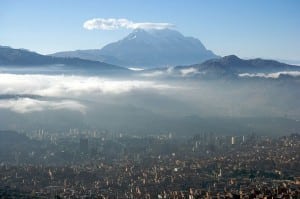 [Via Satellite 10-14-13] Gilat Satellite Networks (Gilat) continues to make strong progress in Latin America after another key contract win last week. It received a letter of award for equipment and services from Entel S.A., the largest telecom operator and satellite network operator in Bolivia. The deal is potentially worth around $12 million to Gilat. Latin America is a definite hotspot for Gilat. In 2012, approximately 33 percent of its revenues came from Latin America. The company has a strong market share in the region. Bolivia, which has a population of just 11 million people, is potentially an interesting target market for satellite based services. When looking at the market, Russell Ribeiro, Regional Vice President, Latin America, Gilat told Via Satellite, “The need for reliable broadband communications to rural and remote locations in Bolivia increased significantly, both through expansion of cellular networks using satellite backhaul and through programs of digital inclusion. The availability of new capacity on the first Bolivian communication satellite pushes the market even further. The Bolivian government is really taking it seriously and investing in the reduction of the digital gap, which is in line with what other governments are working to do in Latin America and elsewhere and extremely positive.”

Gilat will supply Entel S.A. with a SkyEdge II VSAT platform, including HUB and VSATs, Teleport, DTH and solar solutions. The project also includes professional services for the central site installation, project management and training.The network is to be used for the Bolivian government’s national digital inclusion initiative (PRONTIS) and will operate over the first Bolivian communications satellite, Tupac Katari, due to be launched in December 2013. Ribeiro was delighted that Gilat was able to do a deal here and said the company faced “serious competition” to ultimately do this deal.

With the company generating around a third of its revenues from Latin America, a strong performance in the region is key for the operator. In 2012, the company has announced several new deals in Latin America. For example, the company won a deal for another Mexican government project which will see it provide a network of more than 7,000 sites in Mexico, for Globalsat/Alef to provide services to SCT – CSIC (Coodinacion De La Sociedad de la Informacion Y El Conocimiento). It also won a $9.6 million contract with Banco de la Nacion in Peru, as well as $12.8 million contract with the Peruvian Ministry of Education. Another $6.75 million contract for schools connectivity in Colombia was also secured. “We believe that additional ‘digital inclusion”’ projects are likely to take place in the coming years, and we will work towards securing those projects for Gilat,” adds Ribeiro.

In terms of how Gilat sees the market develop over the next few years, Ribeiro adds, “We see a market characterized by large governmental projects, expansion of service providers serving more enterprises and expansion of cellular networks to the rural areas using satellite backhaul, integrated with small BTS. Gilat has and continues to invest in these markets.”