US Army Awards Maxar GEOINT Contract Worth up to $48M

OneWeb Partners With TrustComm as US Military Distribution Partner 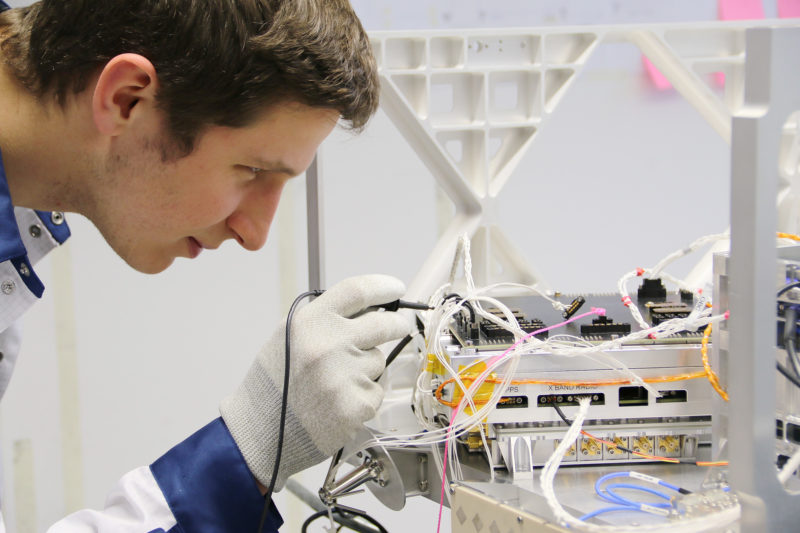 Finnish startup Iceye has big ambitions — the smallsat company wants to do for satellite imagery what IBM did for computing in the ‘80s.

“We want to democratize the technology, to make it available for everyone,” said Rafal Modrzewski, the company’s co-founder and CEO.

IBM took computer technology, then available only to large corporations, and — through the personal computer — made it affordable for people to have on their desks or at their home. Modrzewski said his goal is for Iceye to do the same with Synthetic Aperture Radar (SAR) capability, which just a few years ago was only available to a handful of years ago.

Iceye’s SAR satellites can take detailed pictures at night, through cloud cover and under almost any weather conditions. Modrzewski described the images as detailed enough to count the cars in a parking lot, but not to determine their make or model.

But Modrzewski doesn’t think of Iceye as an imagery company. “We are really problem solvers, rather than satellite imagery providers. The problems that we’re solving need data. Data which is global and reliable and fast — and that’s what we get from our network of satellites,” he explained.

“I think as an entrepreneur, I would always like to be going faster, but there is a limit to how fast you can go that is actually sustainable and doesn’t generate unnecessary risk for our existing customers and I believe we are probably at that limit,” he said. Since 2015, the company has taken on three rounds of venture capital, raising $65 million overall.

Launching a further eight satellites into orbit during 2021 will leave Iceye with the capability to revisit any spot on the earth at roughly three-hour intervals. Modrzewski said that revisit rate, which will allow users to capture information on a near-continuous basis, will give Iceye its power as a tool.

The company’s customers include government agencies like the Japanese Coast Guard — which is accustomed to interpreting SAR imagery and with an in-house analysis capability. But Modrzewski said that Iceye is also going after non-traditional customers, who have “never thought of using earth observation technologies in order to solve their problems or answer your questions. Whether that’s farmers, energy companies, fire departments, maybe insurance companies … There’s a whole variety of industries where the data that we provide can … add value,” he said.

To secure non-traditional customers, he avoids showing them the imagery, which does not convey much information to the untrained eye. Instead, the company offers them information that will help them make better decisions — information generated by Iceye’s automated analysis.

“Our goal is to engage customers with interpretation that happens entirely within Iceye, to make those customers the consumers of the finished information,” rather than getting the raw imagery data and doing their own interpretation and analysis, Modrzewski explained. “Our job will be done when we have users that never see a picture.”

That in-house information extraction is done by a variety of algorithms, some of which use certain forms of machine learning, including convolutional neural networks. But Modrzewski avoids using the term Artificial Intelligence (AI). “It’s a very broad term and as engineers, we always want to be specific,” he said.

Beyond the immediate applications, Modrzewski said, the God’s eye view that Iceye provides can solve problems in business that arise from a lack of trust.

“We always hope that all parties to a transaction are honest, but the question is, are you willing to accept the risk, right? So what we’re really doing is, we’re decreasing that risk. Because if you can’t verify [the other party’s honesty] that risk often is unacceptable to you, but if there is a mechanism that just helps to ensure that [they are keeping up their end of the bargain] then the risk becomes acceptable and a lot of investments or transactions can take place,” he said.