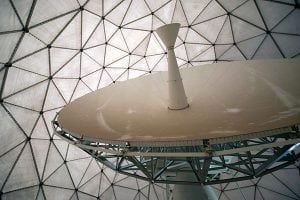 Radomes like this one in Colorado are the primary link for systems like GPS OCX and the satellites they operate. Photo: Raytheon

[Via Satellite 06-20-2016] Raytheon has passed both a qualification and a critical design review milestone as part of its development of the U.S. Air Force’s Global Positioning System Next Generation Operational Control System (GPS OCX). This new system offers significant improvements to the GPS on which the U.S. military and millions of civilians rely, including enhanced availability, accuracy and security.

The first successful milestone for the OCX Monitor Station Receiver Element was the Block 1 Electromagnetic Interference Test, which was completed with a 100 percent requirements pass rate. The second milestone for the OSMRE was the successful Block 2 hardware Critical Design Review, clearing the way for hardware development.

When completed, the U.S. Air Force-led GPS Modernization Program will yield new positioning, navigation and timing capabilities for both the U.S. military and civilian users across the globe. Raytheon is developing GPS OCX under contract to the U.S. Air Force Space and Missile Systems Center, which is replacing the current GPS operational control system. The OCX Launch and Checkout System provides an early delivery of much of the overall OCX capability, and will support the GPS III satellite launches.