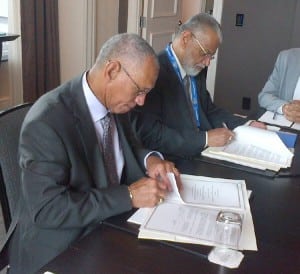 The two space agencies agreed to form a NASA-ISRO Mars working group that will meet annually to evaluate ways to collaborate on missions to explore the Red Planet. This includes potentially combining data from the recently launched Mars Atmosphere and Volatile Evolution (MAVEN) spacecraft from NASA and the Mars Orbiter Mission (MOM) from ISRO. The two satellites reached Martian orbit two days from each other.

The second document outlined how the space agencies will team up on the NASA-ISRO Synthetic Aperture Radar (NISAR) mission. Slated to launch in 2020, NISAR is tasked with studying subtle changes in the Earth’s surface down to a centimeter of change.

“The signing of these two documents reflects the strong commitment NASA and ISRO have to advancing science and improving life on Earth,” said Bolden. “This partnership will yield tangible benefits to both our countries and the world.”