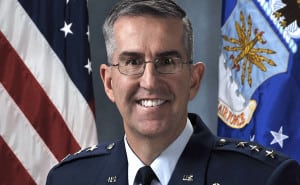 [Via Satellite 08-18-2014] General William Shelton’s successor, General John Hyten, has been promoted to commander of Air Force Space Command (AFSPC). In this role, Hyten is tasked with maintaining mission-ready space and cyberspace forces and capabilities for North American Aerospace Defense Command, U.S. Strategic Command and other combatant commands around the world.

As commander he will manage the Air Force’s global network of satellite command and control, communications, missile warning, space launch facilities and Air Force network operations. He is responsible for space system development and acquisition, and will play a critical role in guiding U.S. decisions regarding the RD-180 engine.

Prior to commanding AFSPC, Hyten served as director of space programs for the Office of the Assistant Secretary of the Air Force for Acquisition in Washington, D.C. He previously commanded the 595th Space Group and the 50th Space Wing at Schriever Air Force Base (AFB), Colo., and was the last active-duty commander of the 6th Space Operations Squadron at Offutt AFB, Neb.