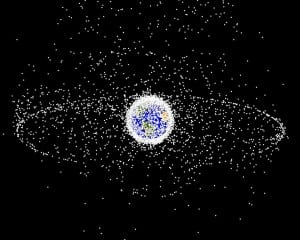 [Via Satellite 07-28-2014] To reign in the ever-expanding proliferation of space debris, cooperation between the governments of the United States and Russia is essential, said Jer-Chyi Liou, chief scientist for orbital debris with NASA’s orbital debris program office. Speaking at the NewSpace 2014 conference, Liou admitted that, though tensions with Russia do currently exist, working together will be an essential step in stemming the rate of debris creation.

Rockets used to launch spacecraft, and spacecraft that decay or collide while in orbit create space debris that is difficult to remove. Tiny fragments of these spacecraft can puncture satellites and other orbiting assets, posing a threat to their on-orbit operability.

“As we continue to move forward to look into ways to better preserve the environment, we need to work with the Russians closely to come out with a way to address those upper stages and retire spacecraft,” said Liou.

Barring anti-satellite (ASAT) tests, leftover spacecraft that were never deorbited pose the biggest threat as they, and their orbits, decay over time. Russia has a high number of dead satellites still in orbit around the planet that could collide with other satellites, creating an innumerable spike in debris levels. Today, the majority of space debris in orbit was created from two events: the Iridium 33 and Kosmos 2251 satellite collision in 2009 and a Chinese ASAT test in 2007. Based on current trends, the risk of future collisions still persists.

Joe Carroll, president of Tether Applications, said the United Nations Outer Space Treaty of 1967 and the decisions reached at the 1972 Convention on International Liability for Damage Caused by Space Objects left out a definition of who is at fault when space objects run into each other. However, today’s space is increasingly more crowded, making a diplomatic solution necessary.

NASA and five other members of the Interagency Space Debris Coordination Committee (IADC) produced six different models of future space debris. Liou said the debris population at the 1-cm level is approximately 500,000 while, if you go down to the 1-mm level, the number is estimated to be a staggering 100 million. The models all predicted that, as is, the debris situation is set to get worse.

“The results from those six models, they are consistent with each other, meaning even with no future explosions and the global 90 percent compliance of the post-mission disposal measures — including the 25-year rule — the debris population in [Low Earth Orbit] (LEO) is expected to increase in the next 200 years, and we expect to see one catastrophic collision involving intact objects every five to nine years,” said Liou.

On the panel, Tether Applications presented its Electro-Dynamic Debris Eliminator (EDDE), which would pull expired spacecraft down to 300 kilometers, allowing either a ferry or atmospheric drag to finish the job of deorbiting. Tethers Unlimited CEO and chief scientist Robert Hoyt said his company is currently testing a product called Terminator Tape, which increases both aeronautical and electromagnetic drag on a spacecraft to accelerate the deorbiting process. Tethers Unlimited has the device on two CubeSats in orbit today, and was selected for fly on SSTL’s Orbital Test Bed mission in 2016.

The Defense Advanced Research Projects Agency (DARPA) is testing a “cellular” satellite design where small “satlets” can form together to comprise a satellite. David Barnhart, program manager for DARPA Phoenix said the idea, originally developed to repurpose satellites, has high potential for reducing space debris. If a satellite can be resurrected, it would no longer count as debris. Barnhart said DARPA has two companies building the satlets and another focusing on production. The devices are scheduled to launch next year, and the launch cost has already been paid.

While these and numerous other technologies are testing and/or seeing their first use, a complete solution to curtail the growth of space debris is not yet available, according to Kirsten Armstrong, program manager for The Tauri Group. For now, the technology is simply not mature enough.

“The technologies we’ve been looking at, they need to be considered as part of a system solution that includes space situational awareness … the bottom line is lots of promising technologies, but there are really few if any high-benefit, high-Technological Readiness Level (TRL) options that are ready to be infused into our work,” she said.