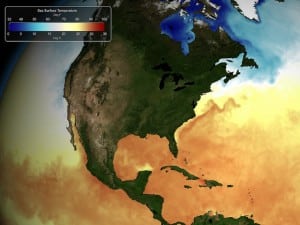 A temperature map of the Earth’s ocean’s. Photo: NASA

[Via Satellite 07-24-2014] The National Oceanographic and Atmospheric Administration (NOAA) has awarded a license to Tempus Global Data for a hyperspectral imaging and sounding system constellation. Tempus will leverage the Sounding and Tracking Observatory for Regional Meteorology (STORM) instrument through an exclusive agreement with Utah State University (USU) who built the instrument for NASA. The company plans to orbit the sounders as hosted payloads in Geostationary Orbit (GEO).

“The license is a compelling example of how private industry can benefit from investment by the U.S. government on research and development for weather-related hyperspectral technology,” said Alan Hall, president and CEO of Tempus Global Data.

Currently NOAA is looking at ways to make use of commercial satellite weather data to prevent or mitigate an impending coverage gap. Hall said the license is the first of a series of milestones that Tempus Global Data anticipates over the next few months.

GeoMetWatch, a company formerly working with USU on the sounders, announced a lawsuit against the university, its subsidiary the Advanced Weather Systems Foundation, and Tempus Global Data CEO Alan E. Hall in May. GeoMetWatch was supposed to orbit a constellation of six GEO-sounders, but failed to secure the necessary funding and the agreement fell apart.