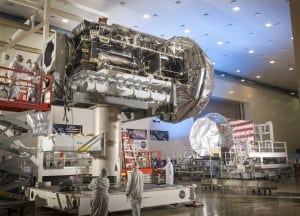 The next MUOS satellite to launch (foreground) has completed environmental testing and is on track for a January launch. Its sister satellite, also pictured, will also launch in 2015. Photo: Lockheed Martin

The complete MUOS constellation is comprised of four operational satellites and one in-orbit spare. The Navy intends to launch this third satellite in January 2015. Lockheed Martin is the prime contractor and system integrator for MUOS.