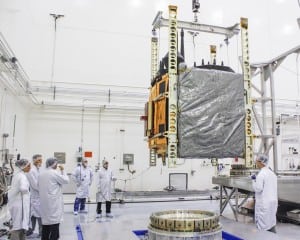 [Via Satellite 02-25-2014] A Boeing Global Positioning System (GPS) IIF satellite has sent initial signals from space following its Feb. 20 launch. This spacecraft joins four others that are created to improve position, navigation and timing information for global civilian and military users.

The GPS IIF satellites have improved atomic clock technology, a resilient signal for commercial aviation and safety-of-life applications as well as a longer design life of 12 years.

“The 42 satellites that we have deployed into service to date for the U.S. Air Force have accumulated more than 500 years of on-orbit operations, and the current system continues to meet or exceed all mission requirements,” said Craig Cooning, Boeing vice president and general manager of Space and Intelligence Systems.