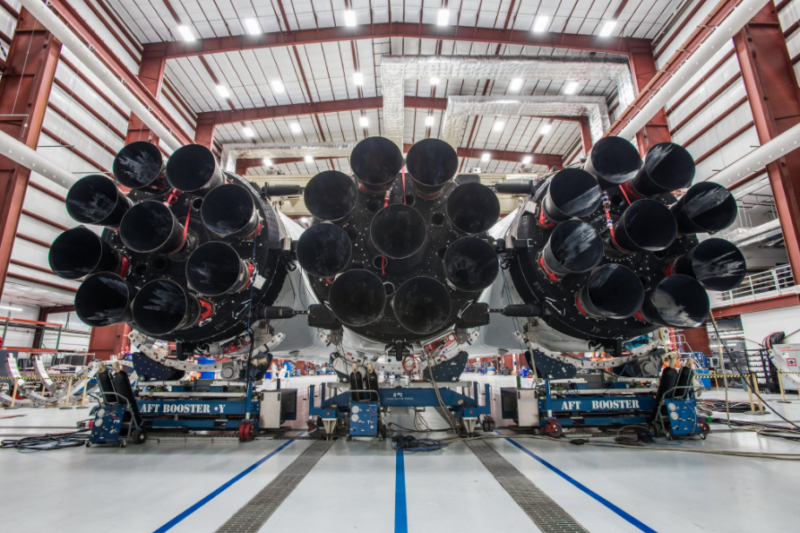 SpaceX’s new Falcon Heavy rocket has gone vertical for the first time on Launchpad 39A at Kennedy Space Center in Florida. Now upright, the rocket will undergo testing ahead of its first demonstration flight next month.

When Falcon Heavy lifts off — clocking in at 229 ft tall and 40 ft wide — it will be the most powerful rocket currently operational in the world, capable of carrying 70 tons to Low Earth Orbit (LEO) and nearly 30 tons to Geostationary Transfer Orbit (GTO).

Heavy will not carry a valuable payload in January due to the high risk inherent in its maiden flight. Instead, SpaceX founder and Chief Executive Officer (CEO) Elon Musk’s personal Tesla car will be enclosed in its payload fairing, destined for Mars orbit.

Payload will be my midnight cherry Tesla Roadster playing Space Oddity. Destination is Mars orbit. Will be in deep space for a billion years or so if it doesn’t blow up on ascent.

Like its predecessor Falcon 9, Falcon Heavy will be partially reusable. If all goes according to plan, two of its three first stage cores will return to Earth for gentle relandings at Cape Canaveral Air Force Station’s Landing Zone 1, with the center core aimed for a SpaceX drone ship.

If you liked tonight’s launch, you will really like Falcon Heavy next month: 3 rocket cores & 3X thrust. 2 cores return to base doing synchronized aerobatics. 3rd lands on droneship.