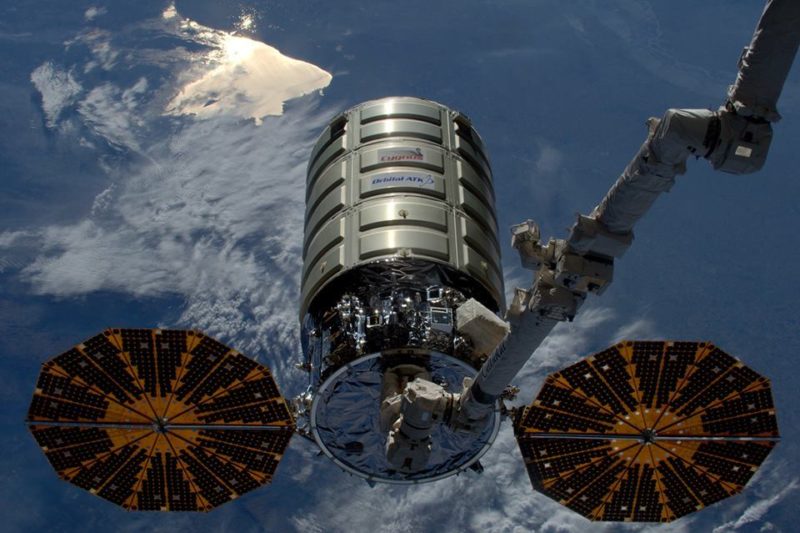 Orbital ATK announced that its Cygnus spacecraft, following a successful stay as a part of the International Space Station (ISS), is now set to deploy a record number of CubeSats in orbit before reentry into the Earth’s atmosphere. The mission, dubbed OA-8, marks the fourth time that Cygnus has been used for NanoRacks CubeSat deployments during its secondary payload mission phase.

Cygnus departed from the ISS at 8:11 a.m. EST this morning, one day after being unberthed by the station’s robotic arm. Now, the spacecraft will use a NanoRacks CubeSat deployer to release 14 CubeSats into orbit. Eight of the CubeSats will join Spire Global’s commercial weather satellite constellation for global ship tracking. The NanoRacks manifest also includes CubeSats from NASA’s Jet Propulsion Lab. Additionally, AeroCube B/C consists of two water-based propulsion satellites assembled by the Aerospace Corp. for NASA’s Optical Communications and Sensor Demonstration (OCSD), marking the first propulsive satellites to deploy from the Cygnus spacecraft.

The spacecraft spent 22 days at the orbiting laboratory before leaving with approximately 6,400 lbs of items for disposal, marking the largest amount of material removed by Cygnus during its cargo resupply missions, according to Orbital ATK. During this period, Cygnus also acted as an extension of the space station and supported science experiments inside the cargo module while docked to the laboratory.

The OA-8 mission began on Nov. 12 when Cygnus launched aboard an Orbital ATK Antares rocket from NASA’s Wallops Flight Facility in Virginia. Upon arrival at the orbiting laboratory, Cygnus delivered approximately 7,400 lbs of cargo and science experiments to the astronauts, marking Orbital ATK’s eighth operational mission to the ISS.

Orbital ATK expects the OA-8 mission to end on Dec. 18 when Cygnus will execute a safe, destructive reentry into Earth’s atmosphere over the Pacific Ocean.