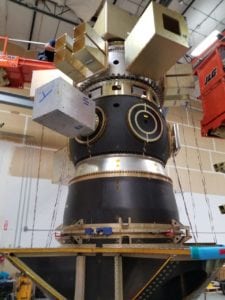 Rideshare broker Spaceflight announced its SSO-A Integrated Payload Stack has successfully completed a modal survey of the primary structure. The series of tests, conducted by a third party, subjected Spaceflight’s nearly 20-foot satellite rideshare structure to low-level vibration to excite the core structure. Results from these tests are used to correlate the detailed finite element model of the structure with flight structure, ultimately allowing engineers to calculate flight environments that the structure, avionics, and customer spacecraft will be exposed to during the launch.

The survey marks an important milestone for the company’s first dedicated rideshare mission, dubbed “SSO-A,” which plans to launch many small satellites into sun-synchronous orbit from a SpaceX Falcon 9 next year. Spaceflight’s SSO-A mission will carry spacecraft from nearly 50 government and commercial organizations across 16 different countries, including Thailand, Finland, Germany, Australia and Singapore. It will deploy all of the smallsats to a sun-synchronous Low Earth Orbit (LEO), which is popular for Earth-imaging satellites. The mission, scheduled to launch from Vandenberg Air Force Base in California, will transport both microsats and cubesats, with 90 percent of the manifest accounted for by commercial and/or international organizations.

“This is the most complex launch we have ever designed and developed,” said Curt Blake, president of Spaceflight. “Because we’re breaking ground with such a historic mission, we need to ensure the payloads and spacecraft subsystems will withstand the turbulence and vibrations of launch.”