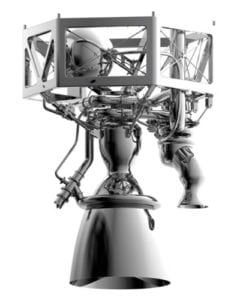 The European Space Agency (ESA) and Airbus Safran Launchers, the 50/50 joint-venture set up by the Airbus and Safran groups, which will become ArianeGroup on July 1, signed the first tranche of the development contract for the future Prometheus LOx-methane engine at the Paris Air Show. Prometheus is a demonstrator running on Liquid Oxygen (LOx) and methane for a reusable engine. Applications deriving from it will be able to equip future European launchers as of 2030.

The Prometheus project began in November 2015, with partnership investments between the French Space Agency (CNES) and ArianeGroup, but took on a truly European dimension in December 2016, at the last ESA ministerial level conference in Lucerne, Switzerland. Prometheus was then allocated a budget of more than 80 million euros ($89.5 million).

The contract signed today also marked the addition of European industrial partners to the Prometheus demonstrator project, including Avio from Italy, GKN from Sweden, Safran AeroBooster from Belgium, and the German and French entities of ArianeGroup. The first tests are scheduled for 2020 in Lampoldhausen, Germany, on the site of the German aerospace agency (DLR).