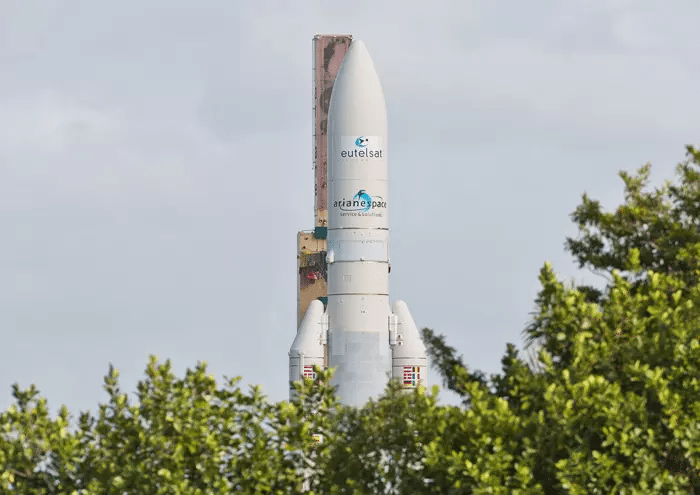 Arianespace announced a new launch services contract with Eutelsat after the launch provider successfully orbited both the Eutelsat 172B and ViaSat 2 satellites on June 1. The Arianespace order book now includes three future launches for Eutelsat: the SSL-built Eutelsat 7C, to be orbited in 2018, followed in 2019 by Eutelsat Quantum built by Airbus, and another High Throughput Satellite (HTS) built by Thales.

An Ariane 5 rocket carrying the Eutelsat 172B and ViaSat 2 lifted off from the Guiana Space Center in French Guiana at 4:45 p.m. PDT. With this launch, Arianespace has now cleared its delayed launch pipeline stemming from labor protests in the country.

In the coming days, ViaSat 2 will start orbit raising with its chemical propulsion system, followed by solar array deployments, and will then switch over to its electric propulsion system to complete orbit raising over the next few months. ViaSat expects it will take several months for ViaSat 2 to reach its final orbital destination, located at 69.9 degrees west longitude.

ViaSat 2 is a Ku-band satellite expected to improve speeds, reduce costs and expand the footprint of broadband services across North America, Central America, the Caribbean, a portion of northern South America, as well as the primary aeronautical and maritime routes across the Atlantic Ocean between North America and Europe.

Eutelsat 172B will deliver increased capacity for applications that include in-flight and maritime connectivity, cellular backhaul, corporate networks, video and government services. It will be located at 172 degrees east, a key neighborhood that provides Asia-Pacific reach over land and sea, from Alaska to Australia. Designed to replace Eutelsat 172A, it will provide increased capacity, more power and improved coverage via C- and Ku-band payloads.