Gwynne Shotwell on the Future of Women, and SpaceX, in the Space Industry 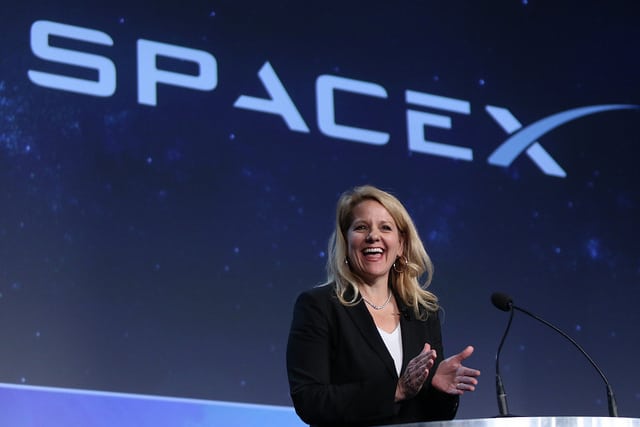 Gwynne Shotwell, president and chief operating officer of SpaceX, hopes to see a future where more women are engaged in the space industry. During her speech on the 33rd Space Symposium stage, Shotwell shared a quote from former U.S. representative Bella Abzug, which stated, “Our struggle today is not to have a female Einstein get appointed as an assistant professor. It is for a woman schlemiel to get as quickly promoted as a male schlemiel.” For Shotwell, Abzug’s words still ring true decades later.

When asked what needs to change for women to have a greater presence in the industry, Shotwell said that doing great work is the best way to get recognized. “It doesn’t matter if you’re male, female or a minority,” she said. As for veterans already established in the field, she urged them to “reach out and help people.”

“I think it’s really important to be inclusive and to go beyond what your normal scope is,” she said. And she stressed this doesn’t just apply to future Einsteins — “We want average women to get promoted as do average men.”

Shotwell also took a moment to shine a spotlight on some of SpaceX’s notable achievements and the failures that have paved its path forward thus far. She showed footage from SpaceX’s first attempt to land a rocket on a drone ship back in 2013, which exploded spectacularly after the Attitude Control System (ACS) failed to mitigate the roll rate of the first stage on touchdown.

Although she said SpaceX engineers were “horrified,” her own reaction was much more positive, as the test hit multiple significant milestones. “I was jumping up and down and cheering,” she said. “I love that video because that’s the first time we were able to bring a rocket back, and we hit the target. We didn’t land on the target, but we hit it… this little postage-sized boat. I was extremely pleased with that.”

While SpaceX has been pushing toward optimal reusability since its inception 15 years ago, Shotwell believes the successful SES 10 mission on March 30 marked “a new era for space.”

One of the benefits of focusing on reusability, she said, is that the rocket is far more robust when it is built to survive re-entry. Consequently, the company’s commercial customers can feel assured that SpaceX’s launch vehicles can safely take their “precious payloads” into space.

As for what SpaceX has learned so far from its re-landings, Shtowell said the first thing they discovered was that refurbishing a piece of hardware that has fallen into the ocean is particularly difficult. “We definitely want to avoid putting the asset in the water before we refly,” she said, referring to the Dragon capsule currently under development for manned missions.

“Minimal refurbishment on the engines is another lesson that we’ve learned,” she said. Shotwell — and SpaceX as whole — believes that reusability doesn’t really count unless the company can prepare a rocket for reflight “as quickly as you can an aircraft.”

“Our challenge right now is to refly a rocket within 24 hours. That’s when we’ll really feel we got the reusability piece right,” she said.

Shotwell also referenced a quote from Arthur C. Clarke, which she said appropriately describes SpaceX’s experience with reusability over the past 15 years: ““Every revolutionary idea seems to evoke three stages of reaction … It’s completely impossible; It’s possible, but it’s not worth doing; I said it was a good idea all along.”

Although Shotwell argued that reusability simply isn’t feasible for certain companies’ specific technologies and vehicles, she sees that position changing as time progresses, and expects more launch providers to begin experimenting with reusable hardware as reusing a first stage can be less than half the cost of rebuilding a rocket from scratch. Furthermore, she believes reusability is the only way to unlock efficient human and cargo travel to the Moon, Mars and beyond.

“I think it’s really important for us to be living on more than one planet,” she concluded. “I hope you all are thinking about [buying] your tickets to Mars.”