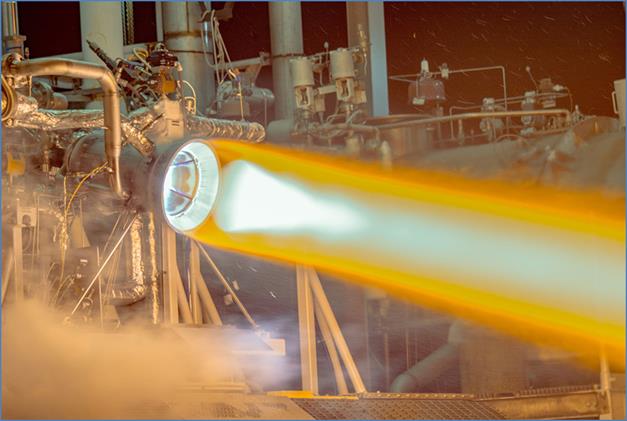 Aeroject Rocketdyne has been working over the last decade to incorporate SLM technology into the RL10 and other propulsion systems to make them more affordable while taking advantage of the inherent design and performance capabilities made possible by 3-D printing.

“We believe this is the largest copper-alloy thrust chamber ever built with 3-D printing and successfully tested,” said Aeroject Rocketdyne’s Additive Manufacturing Program Manager Jeff Haynes. “Producing aerospace-quality components with additive manufacturing is challenging. Producing them with a high-thermal-conductivity copper alloy using SLM technology is even more difficult. Infusing this technology into full-scale rocket engines is truly transformative as it opens up new design possibilities for our engineers and paves the way for a new generation of low-cost rocket engines.”

The 3-D printed RL10 copper thrust chamber would replace the current RL10C-1 model design that uses a very complex array of drawn, hydroformed stainless steel tubes that are brazed together to form a thrust chamber. The new chamber design is made up of only two primary copper parts and takes just under a month to print using SLM technology; reducing overall lead time by several months. The part count reduction of more than 90 percent is significant as it reduces complexity and cost when compared with RL10 thrust chambers that are built today using traditional manufacturing techniques.

Another key benefit provided by 3-D printing, according to the company, is the ability to design and build advanced features that allow for improved heat transfer. For many rocket engine applications, this enhanced heat transfer capability enables a more compact and lighter engine, which is highly desirable in space launch applications.

“Now that we have validated our approach with full-scale testing of a 3-D printed injector and copper thrust chamber, we are positioned to qualify a new generation of RL10 engines at a much lower cost; largely attributed to the additive manufacturing capabilities we have developed and demonstrated,” said RL10 Program Director Christine Cooley.

Aerojet Rocketdyne is applying 3-D printing technology to many of its other products, including the RS-25 engines that will help explore deep space, and the company’s new AR1 booster engine that is being developed to replace Russian-built RD-180 engines by the congressionally mandated deadline of 2019.