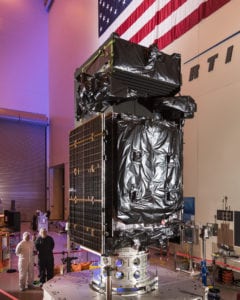 The satellite will begin transitioning to its final location in geosynchronous orbit, approximately 22,000 miles above the Earth. There, its solar arrays, light shade and antennas will be deployed to begin early on-orbit testing.

SBIRS GEO 1 and GEO 2, which were launched in 2011 and 2013 respectively, continue to meet performance expectations, according to a statement by Lockheed Martin. The satellites’ sensor pointing accuracy and sensitivity for detection of targets significantly exceed specifications. While SBIRS’ primary mission is strategic missile warning, infrared data will also be made available for new qualified military and civilian applications at the Air Force’s recently opened Tools, Applications and Processing Lab in Boulder, Colorado.

The next satellite, GEO Flight 4, will undergo final assembly, integration and test prior to its planned launch later this year. SBIRS GEO 5 and GEO 6, which are currently in production, incorporate a new common spacecraft bus, the modernized A2100, to dramatically reduce costs and cycle times while increasing the potential to incorporate future, modernized sensor suites.