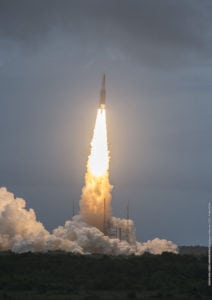 [Via Satellite 12-22-2016] Arianespace successfully launched two Space Systems Lloral (SSL)-built satellites on the seventh flight of its Ariane 5 heavy-lift vehicle in 2016 — and the company’s 11th overall this year with its launched family. Both satellites carried on the mission — Star One D1 to be operated by Brazil’s Embratel Star One, and JCSAT 15 for Japanese operator SKY Perfect JSAT — were produced in Palo Alto, California using the SSL 1300 platform. SSL has confirmed both satellites are successfully performing post-launch maneuvers according to plan.

Once it goes into service, JCSAT 15 will be called JCSAT 110A, as it will be located at 110 degrees east longitude where it will replace the N-SAT110 satellite as well as provide expansion capability. Operating in Ku-band, JCSAT-110A will be used to help broadcast the multichannel pay TV service Sky PerfecTV! and start offering Ultra-HD (4K) programming in Japan. JCSAT-110A will also provide data transfer communications, and maritime and aviation applications for the Oceania and Indian Ocean Region.

Star One D1 is equipped with C-, Ku-, and Ka-band payloads and serves multiple missions, including telecommunications, television broadcast, cellular backhaul, internet access, and other services such as digital inclusion in Brazil and in the Latin American region.