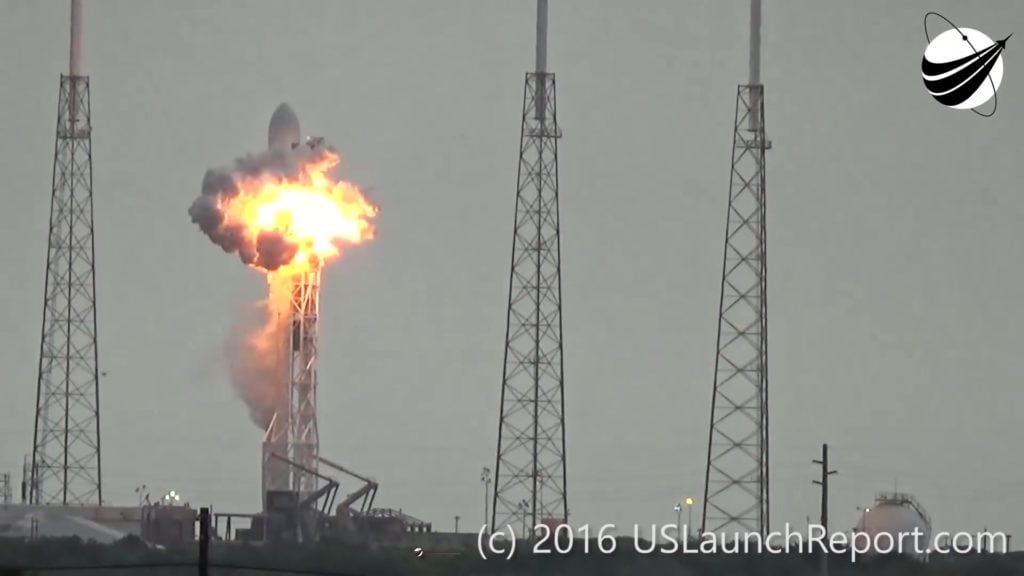 Video screen shot from SpaceX’s Falcon 9 explosion on Sept. 1, 2016 with the Amos 6 satellite on board. Photo: USLaunchReport

[Via Satellite 09-26-2016] SpaceX, the U.S. launch provider that suffered a dramatic Falcon 9 failure three weeks ago, has given a further update as to the probable cause of the anomaly. According to a SpaceX statement issued on Sept. 23, a preliminary review of the data and debris suggests that a large breach in the cryogenic helium system of the second stage liquid oxygen tank took place. SpaceX says at this time the cause of the potential breach remains unknown. All plausible causes are being tracked in an extensive fault tree and carefully investigated. Through the fault tree and data review process, SpaceX says it “has exonerated” any connection with last year’s CRS 7 mishap.

Three weeks ago, SpaceX experienced an anomaly, which resulted in the loss of one of its Falcon 9 rockets and its payload, Spacecom’s Amos 6 satellite. The anomaly took place about eight minutes in advance of a scheduled test firing for the rocket. The Accident Investigation Team (AIT), composed of SpaceX, the FAA, NASA, the U.S. Air Force, and industry experts, are currently scouring through approximately 3,000 channels of engineering data along with video, audio and imagery. The timeline of the event is extremely short — from first signs of an anomaly to loss of data is about 93 milliseconds or less than 1/10th of a second. The majority of debris from the incident has been recovered, photographed, labeled and catalogued, and is now in a hangar for inspection and use during the investigation.

Spacecom has since announced a post Amos 6 plan as it looks to deal with the fallout of the failure. The loss of Amos 6 is a huge blow to Spacecom, which was in process of being acquired by the Beijing Xinwei Technology Group; the deal was dependent on the successful launch of Amos 6. Spacecom said earlier this month that the two parties are working on an “amended” solution as a result of the loss of Amos 6.