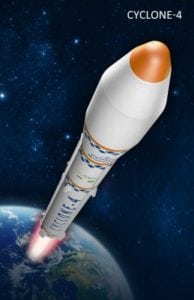 [Via Satellite 09-02-2016] The State Space Agency of Ukraine has authorized the Yuzhnoye Design Office in Dnipro, Ukraine to proceed with a new international launch complex and operations in North America based on the existing Cyclone 4 rocket. The company is beginning a search for business and investment partners to develop the launch infrastructure and conduct sales, marketing, and mission management. On site assessments have already been conducted in Canada and the United States for possible launch complex locations.

The Cyclone 4 is an all-Ukrainian launch vehicle originally planned for use in the Ukrainian-Brazilian joint venture Alcantara Cyclone Space. Brazil decided in 2015 to discontinue the program, though Ukraine was still interested in progressing with the Cyclone 4. According to Yuzhnoye, Cyclone 4 launcher target pricing will be $45 million, all-inclusive, for 3,700kg payloads to Sun-Synchronous Orbit (SSO).

Yuzhnoye has completed the Cyclone 4 launch vehicle design, and the first flight vehicle manufacturing is nearly complete, poising the company for near-term launch ability. The company estimates that with sufficient and timely funding the launch site construction will take 2.5 years, since the ground systems are also designed and partially manufactured.