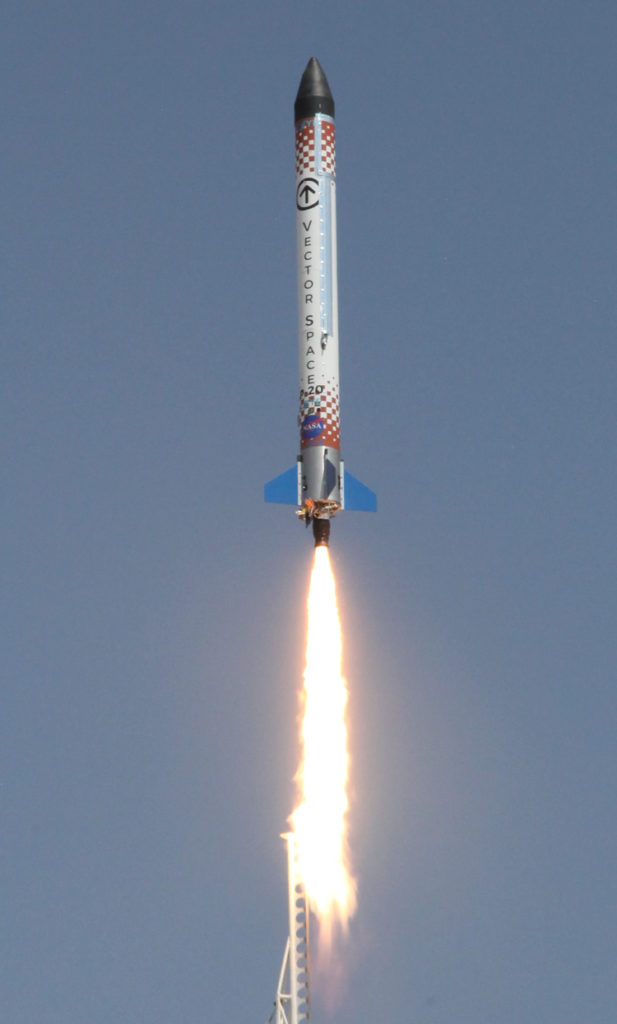 [Via Satellite 08-15-2016] Vector Space Systems, a new micro satellite launch company, is betting big on little rockets. The company successfully tested its P-20 prototype launch vehicle, a sub-scale test vehicle for its 42-foot Vector 1 rocket, which measured just 12 feet in length, in the Mojave Desert on June 30. When built, the company says the launch vehicle will be capable of putting a 50 kg payload into Low-Earth Orbit (LEO) — placing the rocket’s capabilities right at the feet of the growing SmallSat market.

With its full-scale vehicle based on designs from Garvey Spacecraft, which Vector Space Systems acquired last month, the company aims to move to orbital launches in 2018 with the first of 21 launches for its first customer Iceye, a Finland-based company in the process of developing a commercial Synthetic Aperture Radar (SAR) satellite constellation. While Iceye is currently the only contracted customer, Vector Space Systems CEO Jim Cantrell told Via Satellite that the company is in negotiations with customers for more than 50 potential launches.

“With the Iceye contract, we will still have a lot of capacity left for other launches because they will fly out over a number of years. It’s kind of an ideal contract for us because it gives us a nice long flightline and gives us time to build up our flight rates and still service other customers,” Cantrell said.

And it’s likely that the market will continue to grow. Projections indicate more than 400 nano/microsatellites will need launches annually in the year 2022 and beyond, according to SpaceWorks Enterprises 2016 nanosatellite and microsatellite market assessment released earlier this year. The market is expected to see 13 percent growth per year over the next six years, between 2016 and 2022, according to the company.

Vector Space Systems is comprised of industry veterans from SpaceX, Virgin Galactic, McDonnell Douglas and Sea Launch who see a growing demand in the small satellite sector for access to more frequent and affordable launches.

“One of the fundamental things that we think the launch community needs is the ability to get a flight within six months rather than within two years,” said Cantrell.

For now, the company’s entry-level launch is set at $1.5 million and the company is working on arrangements that will allow customers to rideshare their microsatellites.

“We’ll be exactly cost competitive with rideshare opportunities,” said Cantrell. “If you look at it from a cost-per-kilogram basis we’re competitive with the larger vehicles, like Virgin, Firefly and Rocket Lab.”

Cantrell contributes the low cost per launch to Vector’s ability to mass manufacture the launch vehicles, which will partly be made of 3-D printed engine parts. Moreover, the company is looking to lower the cost of launch further by implementing a reusable first stage on its launch vehicles.

“We’re looking at an aero recovery technique that will come in a few years down the road. That will reduce our costs even further because the first stage turned out to be the most expensive part of the vehicle, so it makes sense to bring it back,” said Cantrell, who pointed to the possibility of deploying a parachute on the first stage and recovering it via helicopter.

Cantrell also points to the engine’s electric upper stage that runs on the unique propellant combination of liquid oxygen and densified propylene. He believes that with heavier payloads, the electric upper stage ultimately enables the company to deliver the most cost savings.

“If you had a 50 kg payload and you needed to get it to 800 kilometers, that is where our real cost competitiveness starts to come in,” said Cantrell. “Because of the electric upper stage flattening out the curves, for a couple million dollars you can put this relatively large satellite into a fairly high altitude because there is no penalty with the electric propulsion.”

And with a launch vehicle catering specifically to SmallSat customers, Cantrell points to other weight-saving and convenience strategies.

“Our satellites fly naked,” said Cantrell, noting that microsats typically have to fly inside containers so that if something does happen they don’t threaten the primary payload. “In this case, they are the primary payload. Without those containers not only are you saving the mass — which can be substantial, in terms of micro satellites it can be almost as much as the satellite itself weighs so, in effect, it is doubling the mass-to-orbit with that kind of formula — but it also allows for configuration growth on the standard 3U and 6U platforms, which have a lot of parts available.”

This means that when companies design satellites, they can have more leeway in regards to systems that previously had to fit comfortably inside of the container, such as solar panels or antennas.

Cantrell said customers could also see the benefit of not having to share the launch vehicle in terms of scheduling and deployment.

“It doesn’t matter if they are launching a single satellite or six microsats, they like the idea of owning the entire shroud. Not only are they owning where they go and when they go, it’s just small things like when there are changes. The changes process is much simpler than if you’re on a multiple ride manifest,” he said.

There are some challenges ahead for Vector Space Systems however, the most pressing of which is access to ranges.

“We have to get the flight tests going, we have to get the engines qualified, we have a new fuel that’s patented that seems to work fine. Right now we have nothing that seems to stand in our way except for funding and access to ranges,” said Cantrell. Vector is looking to gradually increase its flights out of each range to about 50 a year, or roughly once a week. He noted that the company is in discussions with Alaska Aerospace Corporation’s Pacific Spaceport Complex-Alaska (PSCA), formerly known as Kodiak Launch Complex, and with NASA for access to launch at Cape Canaveral, Florida.

“We’re designing the vehicles so we can get in and out of the ranges very quickly and, potentially, if the launch conditions are correct, launch multiple a day,” he said.

Vector is also looking to expand beyond the launch sector and is primed to announce a new business unit that will take on the space segment, Cantrell said.

“For the bottom end of the scale, micro, the key features are high-performance, low dollars, and quick turnaround, so once you enable those things, it allows people to think beyond the launch into how people will begin using this infrastructure, and that’s what we’re looking at next,” said Cantrell.