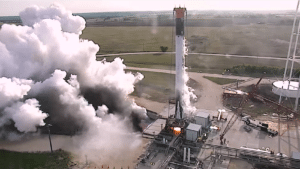 [Via Satellite 07-29-2016] SpaceX conducted its first full duration testing of a landed first stage Falcon 9 booster at its rocket development facility in McGregor, Texas on July 28. The relit booster saw its first use during the company’s May 2016 mission to orbit Sky Perfect JSAT’s JCSAT 14 telecommunications satellite.

SpaceX launched JCSAT 14 to Geostationary Transfer Orbit (GTO) on May 5, followed by landing the first-stage of the rocket on the droneship “Of Course I Still Love You,” in the Atlantic Ocean. So far the launch provider has landed four first stage boosters — two on droneships and two on land. SpaceX has previously stated intentions of conducting its first launch with a previously flown booster.

Check out the video of the test fire: