ULA CEO: the Path to Vulcan is Clear 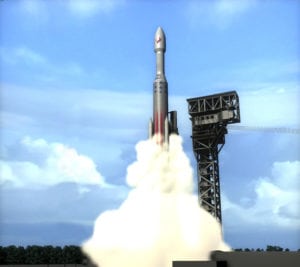 [Via Satellite 07-20-2016] Following approval by the United States Congress earlier this month of the 2017 National Defense Authorization Act (NDAA), United Launch Alliance (ULA) President and CEO Tory Bruno now feels the company will have a sufficient number of RD-180 engines to transition smoothly to a domestic alternative. The current NDAA going into conference allows for 18 additional engines — amended up from an initial nine engines — which, combined with ULA’s previous allotment, brings the total number of approved additional engines to 22.

Bruno told Via Satellite that this supply of engines is enough for the company to move forward with its transition plan in confidence. The company’s flagship launch vehicle, the Atlas 5, flies about twice as often as the lesser used and more expensive Delta family, but its Russian-built engine has been the source of controversy for nearly two years after the U.S. introduced sanctions on Russia for it’s bellicose annexation of Crimea. The path to Vulcan, ULA’s American-made successor to both the Atlas 5 and Delta family, was obfuscated by disagreements over how many RD-180 engines the company should need before a U.S. alternative would be available. Now, Bruno said that path is clear.

“We are very pleased with the Senate and the House taking the time to understand it and to do the right thing,” said Bruno. “This bridge will get us there. We are doing this very fast — this engine and rocket development that we are now in the middle of is going to be done in about half the normal span, and allow us to get off the venerable RD-180 rocket engine and onto an all-American solution.”

ULA has been pursuing Vulcan in the midst of this ambiguity, completing the Preliminary Design Review (PDR) in December 2015. The next major milestone is determining what engine will replace the RD-180. Washington-based Blue Origin is developing the BE-4, a privately funded Liquid Oxygen (Lox) and Liquefied Natural Gas (LNG) engine capable of 550,000 pounds of thrust (lbf); and California-based Aerojet Rocketdyne is creating the AR1, a government-supported Lox/Kerosene (RP-1) engine capable of 500,000lbf. Either replacement will require two engines to match the power of the RD-180. Blue Origin claims its engine, already four years into development, will be flight qualified by 2017, while Aerojet Rocketdyne, having started its development later, says the AR1 will be flight qualified by 2019. Bruno said ULA would make its decision soon.

“Sometime close to the end of the year we are going to down-select, and then move into our Critical Design Review (CDR) and start manufacturing the rocket,” he said.

Beyond just creating a new launch system, with Vulcan ULA intends to halve its cost of launching, based on the Atlas 5 price point. This tactic is not only to enable ULA to be more competitive in launches for National Security Space (NSS) missions, now that SpaceX is a competitor, but to also tap into the commercial market. Bruno said the majority of ULA’s missions today are for the U.S. Air Force, followed by NASA, and then the commercial sector. He declined to say how many commercial missions ULA hopes to launch per year in the future. This year the company has 14 missions in total, four of which — two for Orbital ATK, one for DigitalGlobe and one for EchoStar — are commercial.

Bruno said fielding one launch system instead of two dissimilar rockets will lower prices by making the company more efficient. Two other big steps ULA is taking now are reducing span times — how long it takes to assemble a rocket, integrate it with the payload and launch — and supply chain expenses. Bruno said ULA has reduced the amount of time needed at a launch site from 50 days to 20, and similarly streamlined the manufacturing days needed from about 500 to around 225. Furthermore, the company has dropped more than a third of its supply chain costs.

“A little less than two thirds of our cost is in supply chain,” explained Bruno. “We have gone out and done deals with our suppliers, consolidated, and really worked that supply chain to the point that today we have taken 36 percent of cost out of our supply chain. I expect to take more than 40 percent out by the time we are done and actually offering the Vulcan Centaur and later Vulcan Advanced Cryogenic Evolved Stage (ACES) configurations.”

Vulcan Centaur, the first configuration of Vulcan, is designed more similarly to the Atlas 5, replacing the RD-180 with the BE-4s or AR1s and using the Aerojet Rocketdyne-supplied Centaur upper stage. Up to four or six Solid Rocket Boosters (SRBs) can augment the 4-meter and 5-meter diameter payload fairing versions of Vulcan, respectively, depending on mission needs. Vulcan Centaur’s maiden flight is planned for 2019, while the next iteration, Vulcan ACES is scheduled for 2023. Vulcan ACES is ULA’s replacement for the Delta 4 Heavy, which lifts the U.S. government’s largest spacecraft. However, while the transition from Atlas 5 to Vulcan Centaur is feeling the pressure of government urgency, the shift from Delta 4 Heavy to Vulcan ACES is pending long-lead government needs.

“I have promised the government that we are going to do an orderly transition because [Delta 4 Heavy] carries very special satellites for the government that don’t come around that often. They are very unique, typically high value, and it would be pretty disruptive in the middle of their development to ask them to redesign and be able to be hosted on a different rocket. We are working with them on exactly the timing for when we will transition that to our Vulcan ACES solution,” said Bruno.

He added that ULA will likely end up building the cores for the Delta 4 Heavy out early at the same time as the last of the Delta Medium cores, and then store them for when the government needs them, but this is subject to change.

ACES, unlike a typical upper stage, can operate in space for a week or more and, with refueling, could potentially last years. Bruno said the stage will enable a myriad of new and different space missions.

[Tweet “Unlike a typical upper stage, @ULAlaunch’s ACES can operate in space for a week or potentially years”]

“Because of the ultra-long duration operating time of ACES, it makes it practical to shatter this paradigm of one completely self-contained satellite on one rocket fitting under its nose faring,” he said. “We can actually do more complicated things in space. With distributed lift, we can take a payload up that is so heavy, we can barely get to Low Earth Orbit (LEO) with our biggest Vulcan-ACES rocket — even though that’s not it’s ultimate destination — and then we can lift up another rocket that’s nothing but fuel, transfer that fuel to the ACES, since it’s reusable and refuelable in space, and then at that point, once you’re in LEO, you’re pretty much two thirds to anywhere in the Solar System. So then we can take that gigantic spacecraft and take it anywhere else.”

Once the stages are launched, he said ULA plans to keep them in orbit, building out a fleet of “space trucks” on orbit that could do missions such as repairing, refueling and relocating satellites. Bruno said ULA has a long-term vision for a self-sustaining cis-lunar economy that includes commercial habitats, space mining, manufacturing and other future businesses that ACES would play a critical role in enabling.