A side view of the Electron rocket. Photo: Rocket Lab

[Via Satellite 07-12-2016] With the signing of three launches for Planet (formerly Planet Labs) announced today, Rocket Lab is filling out most of the early space in its manifest for missions with the Electron rocket well before it has ever flown. Rocket Lab revealed Electron, a two-stage, 16-meter rocket dedicated to small satellite launches for around $5 million, in 2014. At the time of the unveiling, the company also mentioned having commitments from 30 customers to use the future launch system. Since then, Rocket Lab has gained even more commitments, which, along with Planet, include 12 missions for Spire, three for Moon Express, and one for NASA.

Planet has historically deployed its spacecraft from the International Space Station (ISS) by piggybacking off of cargo resupply launches. In a July 12 press release, Rocket Lab said the Planet missions will use the full capacity of Electron and are scheduled to occur in 2017. Peter Beck, CEO of Rocket Lab, told Via Satellite that at least 20 Planet Dove satellites will launch on each Electron mission. He added that Rocket Lab has gained other customers as well, which are yet to be announced.

“There are a number of customers that we’ve announced, and there are others as well,” he said. “Our manifest for 2017 and 2018 is starting to fill up pretty handsomely at flying once a month.”

The demand Rocket Lab is seeing stands in contrast to the satellite industry’s typically risk-averse nature. Satellite operators often prefer to see other missions fly first before committing to launch their own payloads. While this is true for both operators of large and small spacecraft, small satellite operators have demonstrated more willingness to put faith in newer launch vehicles.

Rocket Lab’s flight test campaign for Electron is scheduled to begin later this year. Beck said there will be a minimum of three orbital test flights preceding commercial missions. In preparation, Rocket Lab has three launch vehicles currently in production for the flight program, he said.

Even though Electron is yet to fly, Beck said customers are entrusting satellites after doing extensive due diligence. “Before a customer books with us, they always come to New Zealand, they meet the team, look at the launch vehicle, at how we put together their mission and their launch vehicle, and at that point will generally book a mission,” he said.

Ahead of the flight campaign, Rocket Lab has been vetting Electron through a ground qualification and testing program. Beck said the tests involve a lot of hardware instead of simulations — though the company does use simulations as well. He said Rocket Lab is doing full engine testing and stage integration testing before moving into the test flight program. And then, if the flight test results are unsatisfactory, Beck said they would simply add more demonstration missions. “If we need more, we’ll just keep rolling them out,” he said. 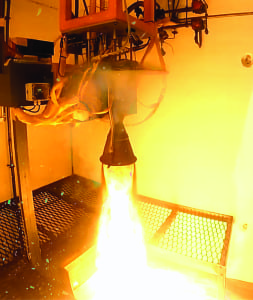 Rocket Lab flight-qualified the Rutherford engine in March this year, and qualified Electron’s second stage in April. Electron uses nine Rutherford engines for the first stage, and one vacuum-optimized Rutherford engine for the second stage. The company also has experience from launching more than 80 sounding rockets. Beck said that while suborbital launches are far less complex and energy-intensive, they share fundamental physics principals and require the execution of a planned flight program not unlike orbital flights.

“Although we haven’t been building orbital launch vehicles [for long], we’ve been building complex aerospace systems for quite some time. We have a reputation and heritage there,” he added.

Rocket Lab plans to start with orbital missions at a rate of about one a month. Over time, the company plans to increase that mission cadence to bi-monthly and ultimately to launch once a week. A critical component for this is the company’s New Zealand launch site, which Beck said is now nearly complete and will start operations in the coming months.

“The site is licensed to launch every 72 hours for the next 30 years. We have a launch availability at our New Zealand launch site that is available nowhere else in the world,” he said.

Rocket Lab is arranging to have launch capabilities from other locations as well. Beck said the majority of missions will likely launch from Rocket Lab facilities than others, but the company does want to have multiple options to serve a wider range of customers. Moon Express’ contract, for example, includes the option to launch from an American range.

More launch sites would enable a greater diversity of missions. Electron is designed for a nominal mission carrying 150kg to a 500-kilimeter Sun-Synchronous Orbit (SSO), but the company is garnering interest for a wide range of mission profiles.

“We have some customers that are looking to go to your traditional 500km sun synchronous, but we are increasingly seeing customers looking for much more unusual kinds of orbits. So many are used to rideshare where you get what you get, that it is enabling them to think of different ways of populating and building constellations,” said Beck.

Beck estimated that half of Electron’s future missions are for traditional 500km SSO, with the other half headed to inclinations that are not easily achievable. For equatorial missions in particular, he said the Rocket Lab is experiencing strong demand.