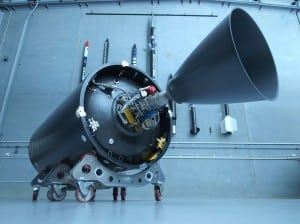 [Via Satellite 04-14-2016] Rocket Lab has successfully completed the qualification of the entire second stage of the Electron launch vehicle.  According to the company, the second stages are running at peak performance and are set to fly during the Electron test program scheduled to run throughout the second half of 2016.

The Electron rocket uses Rutherford engines for the first and second stages, with the single second engine stage optimized for vacuum performance and the nine first stage engines designed for liftoff at sea level. The Rutherford engine uses electric motors to drive its turbo-pumps, and is the first oxygen/hydrocarbon engine to use 3-D printing for all primary components.