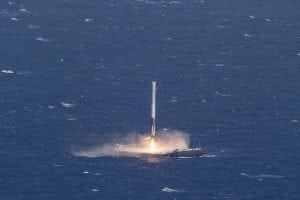 SpaceX’s Falcon 9 first stage returning to the ship “Of Course I Still Love You” on April 8th. Photo: SpaceX

[Via Satellite 04-11-2016] SpaceX’s success in launching and landing a Falcon 9 rocket Friday is elevating the company’s confidence that it will recover more boosters going forward. SpaceX is now planning a test campaign around the recovered first stage with intentions of flying it again on a commercial mission later this year.

The April 8 Commercial Resupply Services 8 (CRS-8) mission for NASA sent the Dragon spacecraft with 7,000lbs  (about 3,200Kg) of cargo, including the Bigelow Expandable Activity Module (BEAM), on its way to the International Space Station (ISS). The Falcon 9’s first stage then landed on the barge-turned-ship “Of Course I Still Love You” in the Atlantic Ocean later that afternoon. Dragon reached the ISS on April 10, where crew bolted the spacecraft onto the station’s Harmony module.

In an April 8 press conference, SpaceX CEO and Lead Designer Elon Musk said he and others at SpaceX anticipated the odds of landing the first stage booster at two-to-one. Having opted to keep the first recovered booster from the December 2015 Orbcomm mission as a memento, the launch company is forming plans around the second recovered booster for actual reuse.

“We are going to do a series of test fires. We are hoping to do that at the Cape rather than transport it to Texas and then bring it back. Our thought is to basically fire it 10 times in a row on the ground, and if things look good at that point we feel it’s qualified for reuse and launch. We are hoping to relaunch on an orbital mission probably around May or June, so pretty soon,” he said. “In the future hopefully we will be able to relaunch them within a few weeks.”

Musk said the mission with the used Falcon 9 booster would likely be with a paying customer. As the year 2016 continues, Musk said SpaceX will attempt more landings, with goals centered around speeding up the process of reusability.

“It will still take us a few years to make that smooth and make it efficient, but I think it’s proven that it can work. There will probably be some failures in the future, but we will iron those out and get it to the point where it is routine to bring it back,” he added.

To salvage as many rockets as possible, Musk said Spacex will need to land around half if its missions out at sea. Geostationary or interplanetary missions will likely exhaust too much fuel to return to land-based sites. Once a rocket lands out at sea, Musk said the company places “steel shoes” over the landing feet and welds them to the deck so the rocket does not tip over.

Musk said “Of Course I Still Love You” now has four engines, making the vessel more akin to a ship than a barge, and that it uses GPS coordinates to hold its position down to within a meter. During the CRS-8 mission, he said the ship had a pitch and roll of about 2 to 3 degrees, which he described as not too extreme. He estimated SpaceX could land rockets on the ship in more turbulent conditions, potentially up to 8 or 9 degrees pitch and roll before it would be come too unstable for the rocket to remain upright. As the company refines the landing process, Musk expressed confidence that more missions would eventually return to ground-based sites.

“We are hopeful that in the long run we will move from say, half our missions being ocean landings to maybe a third of them or a quarter; because it certainly is a lot easier to refly the rocket if it comes back to land,” he said.

Musk added that the next attempt at a ground-based landing is about three months away. He said SpaceX’s next two missions are high velocity to geostationary orbits, making them tough landings even for the ship.

Citing an often-used metaphor by SpaceX, Musk said reusability in rocketry is just as fundamental as it is for other forms of transportation, such as cars or planes. He said the cost to refuel the Falcon 9 is about $200,000 to $300,000, but the cost of the rocket itself stands around $60 million, meaning reuse would drastically cut down on mission costs.

“If you’ve got a rocket that can be fully and rapidly reused, it’s somewhere on the order of a hundred-fold cost reduction in marginal costs. You still have your fixed costs, but in marginal costs it’s a 100-fold reduction,” he said.

Musk also sees potential to increase the number of missions with recovered Falcon 9 boosters. Many of the components, he said, experience limited wear, meaning SpaceX could reuse them a high number of times.

“I think almost everything on the [first] stage will be good for 10 or 20 missions, and with minor refurbishment, you could get to 100,” he said.

In the future, Musk said SpaceX wants to attempt recovery of the payload fairing, which he said costs several million dollars. SpaceX also plans reusability with the Falcon Heavy, where all three Falcon 9 boosters would separate and fly back to independent pads.

“I think this is a really good milestone for the future of spaceflight and I think it’s another step toward the stars. In order for us to really open up access to space we’ve got to achieve full and rapid reusability. Being able to do that for the primary rocket booster is going to be a huge impact on cost,” said Musk.

Musk said SpaceX employees now number around 5,000, and that headcount will continue to grow with launch rate. He said SpaceX expects to be conducting a launch every two or three weeks by the third quarter of this year to keep up with its manifest.