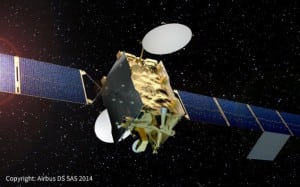 [Via Satellite 02-25-2016] EchoStar is positioning for 2017 to be a major growth year after a slew of new satellites reach orbit in 2016. The company has five satellites/payloads launching this year, including the long awaited EchoStar 19/Jupiter 2, bringing fresh room for the operator to grow.

In addition to preparing for these new satellites, Hughes is also planning its next generation High Throughput Satellite (HTS) Jupiter 3. News of Jupiter 3 comes amid a host of HTS developments within the industry, including competitor ViaSat’s ambition to build three terabyte-level satellites for global coverage.

EchoStar has signed significant new contracts recently, including one with UAE-based Yahsat for a Jupiter system to support the Al Yah 3 satellite, and another with StarGroup in Mexico worth more than $200 million for a new satellite broadband program, but the company’s growth has been stunted by the lack of new available capacity. Fleet expansion remains a top priority, Anders Johnson, president of EchoStar Satellite Services, said Feb. 24 during the company’s fourth quarter and full year earnings call. The desire to place satellites in orbit quickly influenced the decision to switch EchoStar 19/Jupiter 2 from Arianespace to United Launch Alliance (ULA), which is now scheduled to launch in late 2016 aboard an Atlas 5 rocket.

EchoStar added 9,000 subscribers on EchoStar 17/Jupiter 1 during the quarter closing the year with 1,035,000 subscribers, according to Pradman Kaul, president of EchoStar’s Hughes Network Systems division. Kaul said Hughes viewed this increase as pleasing given the continuing capacity constraints on the nearly full satellite. He said churn declined compared to the previous quarter, and for the year, subscriptions increased 6 percent. Still, until EchoStar 19/Jupiter 2, the company must play the waiting game before seeing anything more substantial.

“I think 2016 is going to be a challenge because every month we close another couple of beams, so as we go into 2016, we will have less and less beams available and so the capacity will impact the close adds and net adds as a result,” said Kaul. “But I think it’s only a very short-term phenomenon, because in early 2017 we will have this brand new satellite with a ton of capacity available and we will be able to restart the ramp of subscriber growth.”

Kaul said Hughes is “actively pursuing” the development of the company’s next generation HTS satellites. This could include hosted payloads to increase coverage outside of Hughes’ primary markets. Kaul said EchoStar is evaluating a variety of approaches and technologies, with region, market size and potential investment returns being major factors. He added that a decision on this next generation system should come to fruition in the near future.

“We are working very hard on Jupiter 3 and we are talking to satellite manufacturing vendors. I think in the next few months we will have some announcements hopefully to make on that,” he said.

EchoStar 19/Jupiter 2’s 120 Ka-band spot beams provide coverage for North and South America. The satellite will form a cornerstone of EchoStar’s aeronautical connectivity strategy, Kaul said, because of its Ka-band capabilities. Kaul said he sees Ka-band as the future for satellite-based In-Flight Connectivity (IFC), and that Hughes is developing products that the company hopes to unveil in 2017 to coincide with EchoStar 19/Jupiter 2’s service. Given the emphasis on Ka-band for IFC, Hughes’ strength in this market may also influence Jupiter 3’s design.

Launching sooner than EchoStar 19/Jupiter 2 is EchoStar 21, an S-band satellite formerly known as TerreStar 2, which is scheduled to launch on a Proton rocket in the second quarter of this year. The satellite is for Mobile Satellite Services (MSS) in Europe, for which the company has been in active preparation on the regulatory front before the satellite enters service.

“To the best of our knowledge there are three missions scheduled on the ILS–Khrunichev manifest prior to the EchoStar 21 launch,” said Johnson. “On the regulatory front for EchoStar Mobile, we already have mobile satellite licenses for 27 of the 28 European Union (EU) countries, and are finalizing our last authorization. We are also currently seeking MSS authorization with the EchoStar 21 satellite from additional countries, which are not members of the European Union but are part of EchoStar 21’s footprint. As far as the Complementary Ground Component (CGC) part of our license, while the EU has given us broad approval, each country is working within its own regulatory framework to issue the CGC licenses. We have currently obtained these in eight of the 28 countries, and will obtain additional authorization going forward.”

Johnson said EchoStar 23, a Ku-band Direct Broadcast Satellite (DBS), is slated to launch on a SpaceX Falcon 9 rocket in the late third quarter of this year, followed by EchoStar 105, a satellite under construction by Airbus Defense and Space. Also known as SES 11, EchoStar 105 is a joint satellite with SES, replacing the AMC 15 satellite at 105 degrees west. EchoStar is commercializing the Ku payload, while SES will commercialize the Ka- and C-band payloads.

EchoStar has additional capacity coming online through Eutelsat and Telesat as well. Hughes do Brasil purchased the entire Brazilian Ka-band payload for Eutelsat 65 West A in 2014, which is currently scheduled to launch March 9 aboard an Ariane 5 rocket. Further out, Hughes will have access to 31 Gbps of Ka-band HTS capacity on Telstar 19 Vantage in 2018 over South America. EchoStar 18 is also launching this year, though Johnson said the company is only managing the satellite for Dish, which is funding the entire campaign.

David Rayner, EVP and CFO of EchoStar, said capital expenditures (capex) for the fourth quarter were $223 million, with full year capex at $704 million. This reflects a $106 million launch contract refund in Q3 of 2015, he said. Rayner said he expects 2016 spending to be in the low $800 million range, with the satellites and related ground infrastructure driving the bulk of the spend. Going into 2017, he expects this number to decrease, but added a caveat that this could change if the company starts on new satellite programs. EchoStar reported consolidated revenues of $791 million for the quarter and $3.1 billion for the 2015 year.