SpaceX to Launch Amos 6 Satellite in May 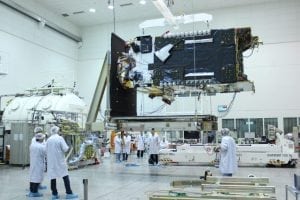 [Via Satellite 01-26-2015] Spacecom, operator of the Amos satellite fleet, announced that SpaceX has scheduled the launch of the Amos 6 satellite for May aboard a Falcon 9 rocket from Cape Canaveral, Fla. Amos 6, to be collocated with Amos 2 and Amos 3 at the 4 degrees west prime orbital position, will provide services to Western, Central and Eastern Europe, Africa, and the Middle East.

Amos 6 features 39 Ku-band segments and 24 Ka-band beams. Facebook has selected Amos 6’s Ka-band beams to be the satellite backbone of its initiative to bring broadband Internet to Sub Sahara Africa with Eutelsat. The new satellite will be larger than Amos 2 and Amos 3 combined and will incorporate new technologies such as high throughput Ka-band spot beams for improved broadband Internet access. The Ka-band spot beams will cover Europe and Africa as well as Ku-band technologies for new and existing clients.