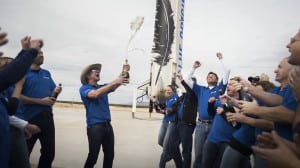 [Via Satellite 11-25-2015] Blue Origin has accomplished a significant milestone in the launch industry. Its New Shepard space vehicle successfully flew to space, reaching its planned test altitude of 329,839 feet (100.5 kilometers) before executing a landing back at the launch site in West Texas.

“Now safely tucked away at our launch site in West Texas is the rarest of beasts — a used rocket,” said Jeff Bezos, founder of Blue Origin. “Blue Origin’s reusable New Shepard space vehicle flew a flawless mission — soaring to 329,839 feet and then returning through 119-mph high-altitude crosswinds to make a gentle, controlled landing just four and a half feet from the center of the pad. Full reuse is a game changer, and we can’t wait to fuel up and fly again.”

Named in honor of the first American in space, Alan Shepard, Blue Origin expects the New Shepard vertical takeoff and vertical landing vehicle to carry six astronauts to altitudes beyond 100 kilometers, the internationally recognized boundary of space in the future, entering the space tourism market.

The New Shepard space vehicle is comprised of two elements: a crew capsule in which the astronauts would ride, and a rocket booster powered by a single American-made BE-3 liquid hydrogen, liquid oxygen engine. At liftoff, the BE-3 delivers 110,000 pounds of thrust. During ascent, astronauts would experience 3 times the force of gravity as the spacecraft accelerates through the atmosphere.

Following powered flight, the crew capsule separates from the booster and coasts into space, providing several minutes of weightlessness. As the crew capsule descends, it would reenter the atmosphere with astronauts experiencing about 5 times the force of gravity before deploying three main parachutes for landing. Meanwhile, the booster descends under guided flight to the landing pad. Just prior to landing, the booster re-ignites its BE-3 engine, which slows the vehicle to 4.4 mph for a gentle, powered vertical landing, enabling vehicle reuse.

“This flight validates our vehicle architecture and design. Our unique ring fin shifted the center of pressure aft to help control reentry and descent; eight large drag brakes deployed and reduced the vehicle’s terminal speed to 387 mph; hydraulically actuated fins steered the vehicle through 119-mph high-altitude crosswinds to a location precisely aligned with and 5,000 feet above the landing pad; then the highly-throttleable BE-3 engine re-ignited to slow the booster as the landing gear deployed and the vehicle descended the last 100 feet at 4.4 mph to touchdown on the pad,” Bezos explained.

The achievement got some attention from SpaceX founder Elon Musk, who wen out to Twitter to congratulate Blue Origin but not without making some technical notes:

It is, however, important to clear up the difference between “space” and “orbit”, as described well by https://t.co/7PD42m37fZ

Getting to space needs ~Mach 3, but GTO orbit requires ~Mach 30. The energy needed is the square, i.e. 9 units for space and 900 for orbit.