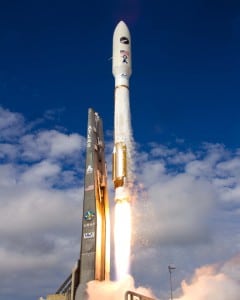 [Via Satellite 11-20-2015] United Launch Alliance (ULA) is kicking off a new program providing free launches to academia for CubeSat missions on the Atlas 5 rocket. The program signals a major commitment to ensuring academic CubeSats, which have ceded space to commercial ventures in recent years, are not crowded out of the launch market.

President and CEO of ULA Tory Bruno said Nov. 19 during a press conference that the Boeing–Lockheed Martin joint venture would start placing a standard CubeSat carrier on the Atlas 5 starting a year and a half from now with the ability to deploy as many as 24 individual CubeSats. This, he said, would relieve the fast but still stunted progress of CubeSat missions in getting to orbit.

“My vision is that we will transition to a point where nearly every Atlas rocket is carrying this standard carrier with these CubeSats. We fly Atlas 10 times a year or more. We are going to more than double the entire worldwide capacity for a CubeSat to get to space. It will completely transform that environment,” said Bruno.

In an accompanying press release, ULA said the program would extend to Vulcan, the company’s future rocket, as well. ULA already granted the first free CubeSat rideshare to the University of Colorado Boulder (CU-Boulder). The university has launched six missions with ULA since 2006, including the Colorado Student Space Weather CubeSat in 2012.

ULA is starting a competition for future rideshares, starting with at least six CubeSat launch slots on two Atlas 5 missions. The program is anticipated to ramp up from there on out.

ULA has launched 55 CubeSats to date, with many satellites hitching a ride through NASA’s Educational Launch of Nanosatellites (ELANA) program. Phil Smith, senior space analyst at the Tauri Group, told Via Satellite that the ramp up in SmallSat focus makes perfect sense for ULA.

“People are past the concerns that existed before,” explained Smith. “First there was the ‘these are university payloads, what are they doing getting here, it doesn’t make sense,’ and similar attitudes. Then there was the concern that these CubeSats might explode or rupture, so the PPOD [Poly-PicoSat Orbital Deployer] launchers were essentially overdesigned to prevent any fragmentation, which has never happened. People I think are getting over this concern they had about CubeSats being low quality or dangerous or otherwise a compromise to the primary payload mission.”
Academic CubeSats have constituted a smaller percentage of missions in recent years due to the explosion of growth from commercial companies. New satellite operators, notably Planet Labs, have ballooned the level of private, business-focused missions.

“Since 2011, 30 percent of CubeSats launched have been built/operated by academic institutions. In 2015 alone this dropped to 26 percent, a reflection of growing commercial interest in using CubeSats,” Carolyn Belle, senior analyst at NSR told Via Satellite.

Belle said affordable launch opportunities remain a restraint for both academic and commercial operators, even with NASA’s ELANA program. She also noted a trend toward larger CubeSats, such as 3U, 6U and even 12U spacecraft. Belle said 66 percent of CubeSat launches since 2011 have originated from the U.S., attributable mainly to cargo missions to the International Space Station (ISS) and cluster launches from vehicles like Orbital ATK’s Minotaur.

“Academic CubeSats most commonly have a primary goal of education (hands-on engineering experience for students) or technology development — and in many cases both. A smaller subset of missions in recent years, around 16 percent, have been for scientific and Earth Observation (EO) purposes. Universities really aim to get the most out of these projects, though, so we commonly note CubeSat projects that are designing new technology that can capture scientific/EO data while providing students with hands-on design/manufacturing/operations/data analysis experience,” she added.

The Atlas 5 does face supply challenges due to politics surrounding access to the Russian-built RD-180 engine. Though limited for U.S. government missions, sanctions have impacted ULA’s long-term ability to supply the engines because they have a lengthy lead-time to develop. Bruno also noted earlier this year that the U.S. government is nearing a lull in the frequency of launches, which would likely mean fewer ULA missions. One of the main goals of Vulcan is to be more commercial so as to sustain the company when the government launch market is less robust.

Analysts do note pent up demand for CubeSat launches, so it is likely ULA will find little trouble filling the available space for them on Atlas 5 rockets.

“In 2016 we are projecting the largest number of university payloads or non-profits at 82 CubeSats because there was a dip in 2014 from 2013,” said Smith. “We are seeing certainly a huge growth in CubeSats in 2016, somewhere almost on the order of 300, because there have been delays in 2015 due to the Falcon 9 accident, the Antares accident and the delay in LauncherOne and other small vehicles.”

ULA plans to award the second free academic CubeSat mission to the winner of a naming competition for the program. The launch provider has not named the CubeSat program, and universities are being offered a can to label it. For other competed openings, ULA plans to issue a Request for Proposal (RFP) in early 2016, with university selections announced in August 2016.