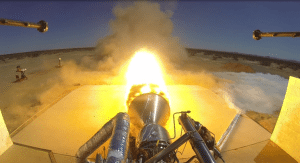 [Via Satellite 09-29-2015] Virgin Galactic has completed new test firings of the main stage engine and upper stage engine for LauncherOne, the company’s dedicated small satellite launch vehicle. The tests included a firing of the NewtonThree for more than 20 seconds, and multiple full duration test firings of the NewtonFour gas generator in excess of six minutes each.

Virgin Galactic’s new engines build off the progress made with the previous NewtonOne and NewtoneTwo engines. NewtonThree is capable of 73,500 lbf, and NewtonFour is capable of 5,000 lbf. Both engines are pump-fed Liquid Oxygen (LOX)/RP-1 liquid rocket engines designed, in-house by Virgin Galactic.

Barber Nichols Inc., a turbopump designer and manufacturer that has previously made turbopumps for NASA, the U.S. military, and private industry, produced the turbopump assemblies for the new Virgin Galactic engines. Development on these engines is expected to continue over the coming months, including testing of the full flight configuration.

“There is much work yet to be done, but the NewtonThree and NewtonFour test results are strongly encouraging,” said Virgin Galactic CEO George Whitesides.