[Via Satellite 08-11-2015] International Launch Services (ILS) is confident that new manufacturing techniques, new technology, and new leadership will make Russia’s new Angara family of rockets a mainstay for the satellite industry. The Angara 1.2 made its maiden flight in July 2014, followed by the debut of the larger Angara 5 in December. Khrunichev, owner of ILS and manufacturer of Angara, Proton, and other launch vehicles, is ramping up the transition from Proton to Angara.

Angara has been under development for several years, but gained traction during the last two. The introduction of a new vehicle could prove quite timely as Proton, ILS’ flagship launch vehicle, has been plagued with failures in recent years. One of the goals of Angara is to improve on reliability. Though Proton has conducted more than 400 missions, a failure rate of almost one botched mission a year recently has tarnished its reputation.

Russia is getting serious now about supplanting Proton with Angara. The past two demonstration missions each carried instrumented “dummy” payloads in lieu of operational spacecraft. Going forward, this will change.

“All the future flights are planned to have true satellites on them,” Phil Slack, president of ILS, told Via Satellite. “The next flight is planned to be in 2016 with another Angara 5. That’s planned to carry an Energia-built satellite for a foreign entity. Then, in 2017 and beyond, there are some additional flights, including flights of Angara 1.2, and ILS is commercially marketing those flights.”
Angara is a Russian government-developed program, and the country intends to conduct several development launches before certifying the vehicle. Slack said the flight with the Energia-built spacecraft is also a development mission.

Slack described the Angara family’s universal core modules as its single most important characteristic. Khrunichev is building the cores in a modular fashion, with larger rockets employing more cores to conduct heavier missions. Slack said currently there are two versions of the rocket planned: the Angara 1.2, which uses a single core, and the Angara 5, which has five cores. There also is a potential future variant, the Angara 3, which is a three-core configuration. Slack said this trio of rockets would serve the market from small satellites going to Low Earth Orbit (LEO) up to the heaviest spacecraft lifted today to Geostationary Transfer Orbit (GTO).

Russia is scaling up the manufacturing capability to produce up to 100 cores per year, according to Slack. This level of production is to satisfy both commercial and government demand for the rocket.

“They are building up a new production factory for the Angara vehicle in the Polyot complex,” Jim Kramer, VP of sales at ILS, told Via Satellite. “What that’s going to allow them to do is invest in a more state of the art factory and add state of the art processes of tooling and manufacturing to design into the manufacturing process. This brings all of the efficiencies of rate production and having things more automated for a lower amount of touch labor.”

Modular Design
ILS expects the modular design of Angara to bring costs down. Other launch providers are pursuing similar approaches as they evolve their launch vehicles. The Ariane 6 program, for example, uses P120 solid boosters from the light-lift Vega to introduce greater scale without greater complexity. Similarly, United Launch Alliance’s (ULA) upcoming Vulcan rocket is planned with two configurations: one with four Solid Rocket Boosters (SRBs) and one with six. SpaceX’s Falcon 9 is scaled upward from the early Falcon 1, and the company’s heavy lift vehicle, the Falcon Heavy, is planned to use three Falcon 9 core boosters.

Like other launch providers, Khrunichev is also envisioning reusability as a goal with Angara.

“It is something Khrunichev has been researching for some time,” explained Slack. “It certainly is a long-term objective to go make it be reusable. The primary engine of the common core is the RD-191, which was designed to be able to fire up to five separate times. So certainly the base capability is there, and if they are able to achieve that in the long run that would certainly make what is already a very affordable vehicle be even more affordable.”

Slack said it is still to be determined if reusability will include the whole rocket family or just the Angara 5. However, a more near-term issue for Angara is having available launch complexes. The Angara 1.2 rocket can lift 3 metric tons to LEO from Plesetsk Cosmodrome, located in Russia’s north. From this location, the Angara 5 offers 5.4 metric tons, which is less than the 6.3 metric tons Proton is capable of from the Baikonur Cosmodrome in Kazakhstan. One of Russia’s largest federal programs today is the construction of a massive space launch facility located further south called the Vostochny Cosmodrome. From there, the Angara 5 can launch approximately 6.4 metric tons, Kramer said.

The Vostochny Cosmodrome has struggled with delays, prompting increased oversight from the government leadership. Russia intends to have the site online by 2021. Slack said that because Proton is continuing to 2025, delays affecting Vostochny would have no impact on ILS’ business. Much of Russia’s current energy has been focused on the launch pads for the Soyuz, which has more near-term goals.

“Part of the delays the Soyuz was seeing were basically staffing of all the infrastructure and the construction crews to do those facility development activities. The plan is as soon as they are done with that on the Soyuz pads those same crews and contractors will then start work on the Angara facilities and infrastructure,” said Kramer. 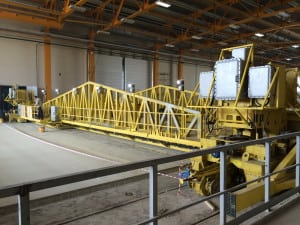 In the meantime, Slack said spacecraft manufacturers are coming to ILS to discuss the compatibility of current and future spacecraft buses. Dauria Aerospace, for example, has spacecraft that could launch on an Angara 1.2 to LEO. Dauria and ILS have been working together to pair Dauria satellites with other spacecraft for GTO missions on Proton, with the Dauria satellite placed on the bottom as the load-bearing spacecraft.

Slack expressed confidence that reform within the Russian space industry will have a positive effect on Angara. By federal law, the Russian space agency Roscosmos is merging with the United Rocket Space Corporation (URSC), which will be the governing body responsible for space research and the use of outer space. At the helm of the combined entity is Igor Komarov, the former head of URSC.

“He is the one that is leading the reform effort across the space industry in Russia,” said Slack. “Prior to joining URSC, he had been with AvtoVAZ, which is the company that produces the Lada brand of automobiles. He led a rescue of that organization when the company was near collapse back in 2009; really worked on improving the quality and the competitiveness of the Lada brand through production efficiencies and changes in the overall business.”

“Kalinovsky came from the civil aviation side of Sukhoi. He was the president of Sukhoi Civil Aircraft company and he was really focused in there on an overhaul of the SuperJet 100 and the SU-34 production lines. His primary focus at Khrunichev is to improve the quality process and also implement production efficiencies to improve the production flow, enabling financial recovery to get stability and profitability long term,” said Slack.

Regarding Proton, Slack said the next launch is of Inmarsat 5 F3, the third satellite in the Global Xpress constellation. The next commercial launch is of Turksat 4B. Slack said other government Proton launches are planned this year as well.