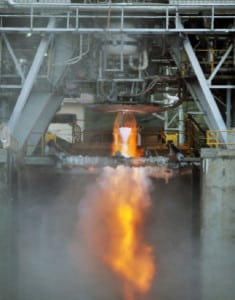 [Via Satellite 07-20-2015] The Indian Space Research Organization (ISRO) completed a hot test of a high thrust cryogenic rocket engine for a duration of 800 seconds. The engine generated a nominal thrust of 19 tons and ran for approximately 25 percent more time than the engine burn required for flight.

According to ISRO, the performance of the engine closely matched pre-test predictions made with in-house developed cryogenic engine mathematical modeling and simulation software. The July 16 hot test was the 10th in a series of tests planned and executed as part of the development of the engine. ISRO is planning further tests in high altitude conditions and in stage configuration prior to flight stage realization.