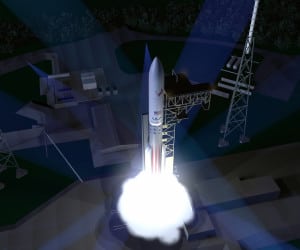 Artist rendition of the future Vulcan vehicle during lift off. Photo: ULA

After launch, the Centaur upper stage will release the payload and the first stage booster will release the engine. The engine’s hypersonic re-entry into Earth’s atmosphere will then take place with an advanced inflatable shield, which Bruno said will also significantly slow down its speed once it re-enters the atmosphere.

ULA will then attempt a parafoil recovery with a mid-air capture. A slide presented during a media briefing showed a CH-47 Chinook-type helicopter aircraft attempting the mid-air capture. Recertification of the recovered engine would then take place back on the ground and, finally, the engine would be reattached to the next rocket to be used for launch.

“[This is] about realizing the true commercial potential of space,” Bruno told reporters.

The first flight of Vulcan will take place in 2019, Bruno said. ULA, he said, wants to attempt its first mid-air recovery by 2024.

There are two parts to Vulcan. The first part will consist of a single booster stage, the high-energy Centaur second stage and either a four- or five-meter-diameter payload fairing, ULA said in a statement. Up to four solid rocket boosters will augment the lift-off power of the four-meter configuration, while up to six solid boosters can be added to the five-meter version.

In part two, which ULA said will take place by 2023, the Centaur second stage will be replaced by the more powerful, innovative Advanced Cryogenic Evolved Stage (ACES), making the NGLS capability that of today’s Delta 4 Heavy rocket. ULA said ACES will be able to execute almost unlimited burns, extending on-orbit operating time from hours to weeks.

Vulcan’s upper stage will be an advanced cryogenic engine, ULA said. It will feature a 75 percent performance increase, using ultra-lightweight balloon tanks with three-time the propellant of modern second stages. It will feature one-to-four advanced rocket engines, which ULA said will be selected from Blue Origin’s BE-3U, Aerojet Rocketdyne’s RL-10, and a XCOR engine.

ULA last year announced that it had partnered with Jeff Bezos-owned Blue Origin to provide a cutting-edge engine for Vulcan, while also providing a viable alternative to the Russian-made RD-180 first stage booster. ULA said this collaboration to fund the development of a new, United States-made BE-4 rocket engine is part of reducing the cost of launch.