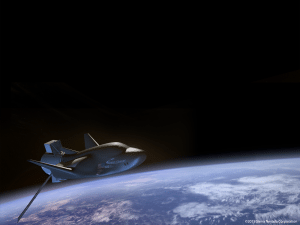 [Via Satellite 03-31-2015] After a very public downselect from the final round of NASA’s Commercial Crew Program (CCP) in 2014, the fate of Sierra Nevada Corporation’s (SNC) Dream Chaser space vehicle appeared unclear. However, the program is very much continuing, evidenced not only by the recently amended NASA Space Act Agreement (SAA) for another Commercial Crew Integrated Capability (CCiCap) milestone, but also by SNC’s continued efforts to provide a diverse range of in-orbit services with the vehicle.

“I think what was lost in [the downselect] was that Dream Chaser is an architectural design. The commercial crew program was a mission for that design; it wasn’t the entirety of it. Much like airplanes are designed for different purposes — cargo, crew, firefighting and so on — that is the mindset we went into Dream Chaser with: to have multiple configurations and multiple missions,” Mark Sirangelo, corporate vice president of SNC’s Space Systems, told Via Satellite.

Dream Chaser, a reusable spacecraft capable of launching atop a rocket and landing on a runway, is the culmination of more than 10 years of development work, and five years of collaboration with NASA. The vehicle can fly autonomously, and has manned and unmanned versions still under development for a range of different missions.

Sirangelo described three variations of the same airframe when Dream Chaser was conceptualized. The first is its well-known crewed version for transporting personnel to the International Space Station (ISS) or other destinations. The second is a derivative of the first, allowing for extended crewed missions for projects such as satellite repair or active debris removal. And the third design is a fully autonomous unmanned variant that could linger in space essentially as a mobile satellite platform for scientific research. Sirangelo said each version is continuing today, with the next phase of flight tests planned for later this year. The first version is under construction in partnership with Lockheed Martin. He sees the second design as the one most likely to have the greatest impact on the satellite industry.

“[The second version] is where we would probably intersect with the satellite industry mostly. The vehicle is capable of doing satellite movement, satellite repair, [and] satellite retrieval, in effect reducing debris in space by being able to reposition dead satellites out of an orbit or move them to a holding orbit if necessary. That could be done with crew aided by robotic arms — which we have partners who are developing — or it could be done with just crew. The vehicle is capable of housing inter-vehicle airlock that would allow for [Extra Vehicular Activities] EVAs from the vehicle,” said Sirangelo.

This version of Dream Chaser would operate in Low Earth Orbit (LEO) up to about 1,000 nautical miles, and could stay on orbit for up to as long as a month with a crew of two or three people. Sirangelo said the interjection of crew for complex servicing missions was seen as necessary because most satellites a decade or older were not designed to be manipulated in space. He points to the well-known STS-125 U.S. Space Shuttle Atlantis mission that repaired the Hubble Space Telescope as a prime example of something Dream Chaser could replicate.

Regarding the market for Dream Chaser, NASA remains a major potential customer. SNC has already unveiled a new iteration for the Commercial Resupply Services (CRS-2) contract to bring cargo to the ISS. Sirangelo added that the space vehicle could conduct multiple missions during a single flight, such as moving or fixing a satellite on a return trip from the space station. Conducting multiple consecutive missions from a single launch would reduce the cost of performing operations. Though satellites in LEO are typically not as expensive as those in the geostationary arc, Sirangelo defends the value of the market given its sheer size.

“In terms of quantity, there are in the neighborhood of 10 times the satellites that exist in a Low Earth Orbit compared to a GEO orbit, and if you can have a vehicle that is both reusable, plus it can do multiple stops in the same mission, we think there is enough potential that could make a difference,” he said. “In our case we are not just looking at repair. We think that there are a number of dead satellites which might be able to be repositioned that could reduce future LEO debris by a significant quantity, or could open up slots for people to be able to use orbits right now that are not accessible.”

Sirangelo said SNC is working toward a mission profile that would see the first Dream Chaser reach orbit in 2018. This would be a CRS 2 mission variant, and he adds that the company has seen customer interest. Currently SNC is in a series of study and development contracts, of which only some were reported publically, he said. Studies indicate a global interest in the Dream Chaser vehicle.

“It has been shown that the Dream Chaser has a very high exploitation potential for a variety of European needs at reasonable costs, especially as an unmanned science platform in LEO as well as a spacecraft for active debris removal,” Fritz Merkle, member of OHB’s executive management board, told Via Satellite.

Notably, OHB concluded that the Dream Chaser “mini-shuttle” is today even more capable of in-orbit services than NASA’s space shuttles of the past.

“The space shuttle rescue and repair of Intelsat 603 required the shuttle to be able to maneuver on-orbit, rendezvous with the failed satellite, and enable an extra vehicular activity capability for the astronauts to capture and de-spin the satellite. Dream Chaser has a very capable internal propulsion system that will allow it to do extensive on-orbit maneuvers, even beyond that of the space shuttle, plus the vehicle was designed to accommodate an air-lock in front of the rear exit hatch to facilitate EVA and robotic activities,” said Merkle.

While Dream Chaser lacks the large cargo bay the shuttle had, Merkle said satellite repairs are quite achievable with EVA activity. Sirangelo also highlighted the advances in robotics and flight controls over the past 35 years that make Dream Chaser missions that much more feasible. Unmanned missions can launch with Ariane 5, H2B, and potentially the Falcon Heavy or upgraded Falcon 9 rockets. Manned missions are currently designed to launch on the Atlas 5. SNC plans to use United Launch Alliance’s (ULA) next generation launch system in lieu of the Atlas 5 once the rocket is discontinued.

“We are not a launch provider so it is not something we are competing with these companies,” added Sirangelo. “We would buy the launches as we do for our satellites. We are a satellite maker particularly for LEO, so we are not someone who solely thinks of this theoretically. We could be our own customer at some point.”