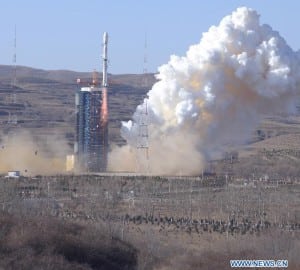 CBERS 4 launch aboard a Long March 4B. Photo: Xinhua/Tian Zhaoyun

[Via Satellite 12-08-2014] China’s state-run news agency Xinhua reports the 200th launch of a Long March rocket occurred Sunday Dec. 7, carrying the Chinese-Brazilian Earth Resource Satellite (CBERS) on a Long March 4B. CBERS 4 is the fifth satellite in the Earth observation program. The satellite’s development was accelerated following a Long March 4B failure in December last year in which the satellite did not enter orbit. The next satellite in the series, CBERS 5, is scheduled to launch in 2017.

According to Xinhua, China is planning two next generation rockets: the Long March 5 and the Long March 7. The Long March 5 will have the ability to launch a 25-ton payload to Low Earth Orbit (LEO), or 14 tons to Geostationary Transfer Orbit (GTO). Fanpei said this rocket is designed with China’s upcoming space station in mind, and is expected to make its maiden launch in two years time. The Long March 7, capable of lifting 13.5 tons to LEO or 5.5 tons to a 700-kilometer sun-synchronous orbit, has a sooner maiden flight planned for 2015.