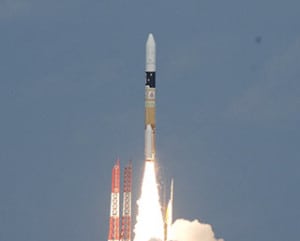 [Via Satellite 12-02-2014] The Japanese Aerospace Exploration Agency (JAXA) and Mitsubishi Heavy Industries have launched the Hayabusa 2 asteroid explorer satellite aboard an H2A rocket. Liftoff occurred on Dec. 3 from the Tanegashima Space Center, and the spacecraft separated on an Earth-escape trajectory after 47 minutes and 21 seconds.

Hayabusa 2 follows the 2003 Hayabusa mission, which retrieved samples of the Itokawa asteroid and brought them back to Earth in 2010. The second Hayabusa mission is en route to reach Asteroid 1999 JU3 in the summer of 2018. The satellite is tasked with mapping the asteroid and, in 2019, taking samples of its carbon-rich surface.