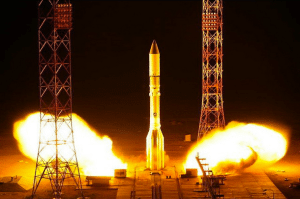 [Via Satellite 09-29-2014] The Russian Federal government has completed the first successful launch of the Proton rocket since the failure that destroyed the Russian Satellite Communications Company’s (RSCC) Express AM4R satellite in May 2014. The successful launch occurred on Sept. 28 at 12:23 Moscow Time from the Baikonur Cosmodrome.

Khrunichev State Research and Space Production Center, Proton’s manufacturer, reported the spacecraft separation proceeded from the Briz-M upper stage during its designated time. The rocket carried a satellite known as “Ray” or “Loutch SC” for the Russian government.

According to a spokesperson for International Launch Services (ILS), the commercial operator of Proton, there are four more Proton launches — a combination of commercial and government — currently planned. The Loutch mission marks the fifth Proton launch this year.