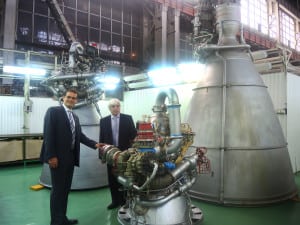 [Via Satellite 09-26-2014] Executives from Swiss Space Systems (S3) met with Russia’s JSC Kuznetsov to check the NK-39 engines planned to power the unmanned suborbital shuttle SOAR. The two companies signed a memorandum of understanding at the Sochi Winter Olympics to collaborate on the engine, which would enable SOAR to launch satellites weighing up to 250 kg into orbit.

Swiss Space Systems plans to use a modified version of the NK-39 for the shuttle. JSC Kuznetsov will also leverage its experience in aircraft engines and maintenance to help conduct flights with the reusable vehicle.

S3 and JSC Kuznetsov intend to begin a test-firing campaign of the engine in mid to late 2015. The first flight test of the SOAR launch vehicle is scheduled for 2017.