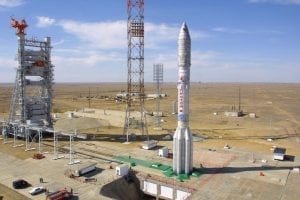 [Via Satellite 09-04-2014] Russia’s federal space agency Roscosmos has announced the first Proton launch since the May 2014 failure that claimed RSCC’s Express AM4R satellite. Roscosmos said Proton manufacturer Khrunichev and several other companies completed an autonomous inspection of the launch vehicle, the upper stage and the spacecraft fairing.

The return launch of the Proton-M rocket with the Breeze-M upper stage is slated for Sept. 28, which will be the fifth Proton launch this year. The payload will be a relay satellite known as “Ray,” which was designed and manufactured by ISS-Reshetnev. Roscosmos reports the rocket is ready for integration with the spacecraft.