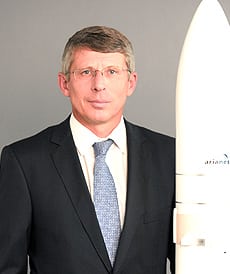 [Via Satellite 07-31-2014] Airbus Group and Safran have selected a chief executive officer and outlined the board of directors for their new 50-50 joint European launch venture. Alain Charmeau the current head of operations at space systems for Airbus Defence and Space was appointed to CEO, while Safran’s Deputy CEO & COO Marc Ventre was nominated for chairman of the board of directors.

Future proposals for members of the six-person board of directors are expected by September. The joint venture will leverage the expertise gained through the Ariane rocket family in hopes of creating a more competitive European launch company. Leaders of the joint venture anticipate the  signing of the first phase of the transaction and the initial start of operations by the end of the year.

“The management is tasked with a clear mission: to improve competitiveness of the future European launcher business. This objective is without alternative for me – either, we fundamentally drive change in this sector or we risk becoming irrelevant very soon,” said Tom Enders, CEO of Airbus Group.