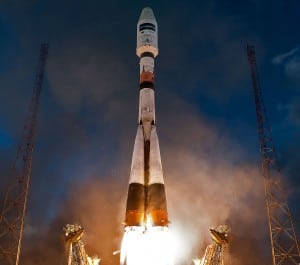 Sentinel 1A launch aboard a Soyuz. Photo: Arianespace

[Via Satellite 07-21-2014] Arianespace has signed a contract with the European Space Agency (ESA) to launch Sentinel 1B, the second radar satellite in the Copernicus program. The launch is planned for 2016 using a Soyuz rocket and will deliver the satellite into a sun-synchronous orbit.

Sentinel is a joint environmental monitoring program between the European Union and ESA. Sentinel 1B is a C-band radar satellite identical to its predecessor, Sentinel 1A, which was also launched by Arianespace aboard a Soyuz rocket. Built by Thales Alenia Space, the 2,300 kg spacecraft will increase the capacity available for space-based environmental and security monitoring.